Different types of analysis in FEA: beyond linear static!

As promised in the video, you can get my free online courses below:

Just so you know: this will take around 15 min to read.

As I wrote recently this year I want to help you gain confidence in the FEA outcomes you get in your work!

I think it makes sense to start with types of analysis in FEA and their uses. If you won’t be certain about the analysis type, I don’t think you can ever be certain about outcomes. This also will show you what you get and what you miss in different approaches. It will make the further discussion much easier!

Let’s begin with the obvious:

If you press calculate in your software this is what happens by default. This is definitely the analysis used the most in FEA world. Vince Adams in his NAFEMS book (A designer’s guide to simulation with FEA) suggest that linear static accounts for over 90% of all analysis. He also points that more than half of those systems are not linear or static in reality!

Why is then linear static so popular? Simply put:

There is not a lot that can go “wrong” with linear static. This is a very straightforward method. Just press calculate and you are set!

It is also the fastest method when it comes to computing. I mean you can calculate a huge system on your smartphone in a matter of minutes!

What is also incredibly important – you can get a simple linear solver for free with a lot of CAD packages nowadays. This is in contrast with nonlinear solvers are still rather expensive (still there are few open source solutions too)!

However, this is not all:

For many years linear static was the “only tool” in FEA arsenal. This is because computing in the “old days” was much slower, and anything more than linear static would bog the computers for months!

This meant that a lot of workarounds were developed. We had to write rules on how to analyze a nonlinear system with linear analysis safely… simply because then, there were no other options.

This means that we have a lot of rules that allow us to analyze problems with linear static. Even if the problem we face is not linear nor static in nature!

This approach is not possible all of the time (and has some serious drawbacks on few occasions), but still it leads to the enormous popularity of linear static.

Since linear static is the most basic procedure, you have to assume a lot of things in order for it to “work”.

Take a look at what actually means that the analysis is “linear” and “static”:

As you can see we can divide this into two “categories”:

Let’s focus on this now, so you will not only understand the limitations but also understand what other possibilities are!

If you follow my blog for quite some time, I’ve already discussed few topics about nonlinearities. So let’s start with dynamics now : )

If you (like me) have a civil engineering background understanding inertial effects might be a bit difficult, so let’s make a small example.

In both cases, I applied a 90deg rotation to the bottom of the handle. On the left, you see a normal “static response”. Rod simply rotates, no stress, no strain… nothing. Just deformation. However, on the right, I applied the same rotation in a relatively short time. Handle starts to rotate before the tip even “realizes” there is a movement to be made. Then the “tip” tries to catch up and everything moves funny.

Notice that the movement still last after the rotation is applied. It would die off due to damping eventually.

This is a typical dynamic analysis where the speed on which the load is applied actually plays a role. The static design does not take such inertia effects into account! You need a dynamic analysis for that!

If you have something that oscillates at a certain frequency you most likely have vibrations in your system. In general, you can calculate such a system with forced response analysis. In short, it will tell you how your structure will react to excitation with such frequency. The risk here is that if this frequency is close to the natural frequency of the structure resonance will happen and amplitude can reach infinity (if there is no damping of course).

Forced response analysis is a bit more complex than a more popular approach in such cases that is modal analysis. In fact, modal analysis is so popular that your FEA package might actually call it “dynamic analysis”.

Modal analysis is relatively simple. It does not analyze how your structure behaves under any given excitation. Instead, it tells you what are the natural frequencies of your structure. Then, when you know the excitation frequency you can check yourself if the resonance is a real issue.

This is how first few natural frequencies look like for the fishing rod from a previous example. Of course in the outcomes, you also get frequency in Hz!

As it is easy to imagine linear static cannot take such effects into account.

I’m on the edge here if this should be a separate “entry” on the list. After all, this is a “normal” dynamic analysis., However, impact analysis of all kinds are so popular that I figured that I will list this simply for reference.

If something hits something else this is it. All crash tests, drop tests etc. are in the category.

If you are analyzing a smartphone being dropped on the floor, this is an impact analysis.

An interesting note is, that there are some simplifications in various industries about this. For instance, some dynamic loads from impact are assumed to be static (but their value is increased several times) etc. This makes linear static able to “somewhat” deal with this issue – at least as long as you trust in those multiplication factors!

This is a tricky beast to describe, I think this is the most “elusive” concept I will discuss here! Luckily I already did a post on that! In short, if you take into account geometrical nonlinearity you can take into account the fact that geometry change will influence how the model carries the load.

This can help (geometrical strengthening) or not (all forms of instability like i.e. buckling). To show you how it works I will use a real-life example I really like: 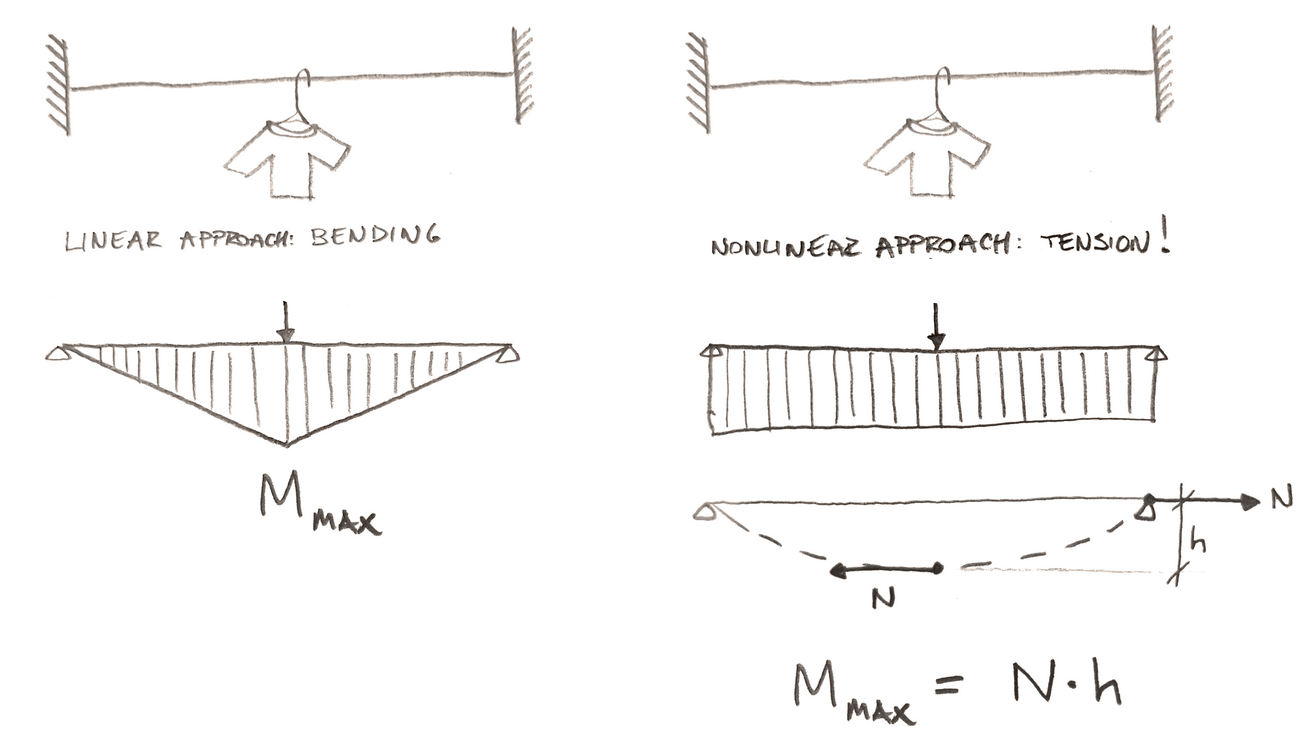 Thing is simple! Imagine that I hang my favorite sweater (thank you granny!) on a string to dry.

Linear approach dictates to treat the string as a beam. So I would calculate the bending moment, and string bending capacity (which is minimal at best). In the end, stresses would be so high there is no way my string can carry the load (there is a numbers example in another post for this!)

But we all know this works, and you don’t need a steel rope to hang laundry on!

This is where nonlinear approach kicks in!

The solver can consider the deformation in the string. If the deflection (h) is high, the tensile force in the string (N) and reaction force on the support (again N) create a pair of forces that carry the bending. Nice!

This may be hard to believe in, but there is a simple mental test:

This is because the string was to “weak” to carry the load as a “simply supported beam” (where table provided vertical support with horizontal sliding). It even tried to go into “nonlinear mode” and generate the tensile force (to the rescue!). Sadly the table didn’t have the horizontal support, so the string fell down to the floor.

This is far easier to understand so I will be brief here (if you want more read this!). All materials behave in a nonlinear way at some point. However, many of them have the place where their reaction to load is purely linear. This can be easily shown on a chart: 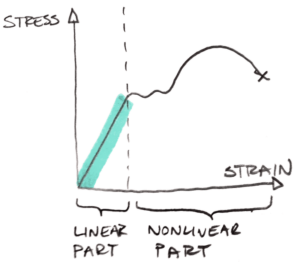 If you keep strains (and stresses) in the “green linear part” shown above you are happy. This is where material acts in a linear way. 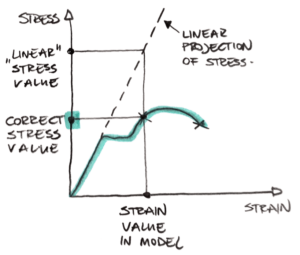 This is when you should use nonlinear material analysis (or use other tricks).

Whenever I start to write anything about the contact I feel obliged to say: I know there are “linear contact algorithms”. Femap has one and I use it from time to time. Still, since this is an “iterative” procedure I’m willing to call it “nonlinear” anyway!

This is the type of feature, where two parts in your analysis can “touch” each other. This doesn’t, however, mean they are “glued together”. If you want to separate them you freely can… you just can’t push them one “inside” the other.

If the bending is “downward” you get compression at the bottom. The plate pushes against the wall and carries compression nicely. However, if you change the direction of the bending compression is at the top. Since there is no bottom bolt there is nothing to carry tension there… and problems begin!

When you start analysis you may not be sure where things will touch and where they will “separate”. This is why you define contact between elements (endplate and a wall in this example). Analysis with contact will check for you, what will happen : )

This is, of course, a very short description, feel welcome to read more here!

Types of analysis in FEA – a short summary!

As you can see there is a lot you can do in FEA. Clearly, this is just a short description, not a guide of any kind. What I wanted is to show you what can be analyzed, and what is not “included” in the linear static analysis. This way you will be more aware of potential dangers.

There are subtle things that can be said about each of the analyzes I have described here. Especially since those things “mix” and often you will use materially and geometrically nonlinear analysis with contact etc. We will discuss some of the nuances in the following posts!

If this was useful to you share it with friends that may enjoy this post as well!

Great! I have a free nonlinear FEA course for you! Get it by subscribing below: