Geometrically nonlinear analysis – how does it work?

Geometric nonlinearity is incredibly useful in structural analysis. It can help you check if your model is correct, or allow for a great structural optimization. Today I will discuss the basics of what does geometrically nonlinear analysis do using not the theory but real-life examples!

What you will learn here

I will explain what nonlinear geometry actually does. I promise there is no complex theory here – I will only use simply to understand real-life examples.

Always start with something positive: Laundry!

I really love simple real-life examples. When it comes to geometric nonlinearity the best one is a string you hang your laundry on. 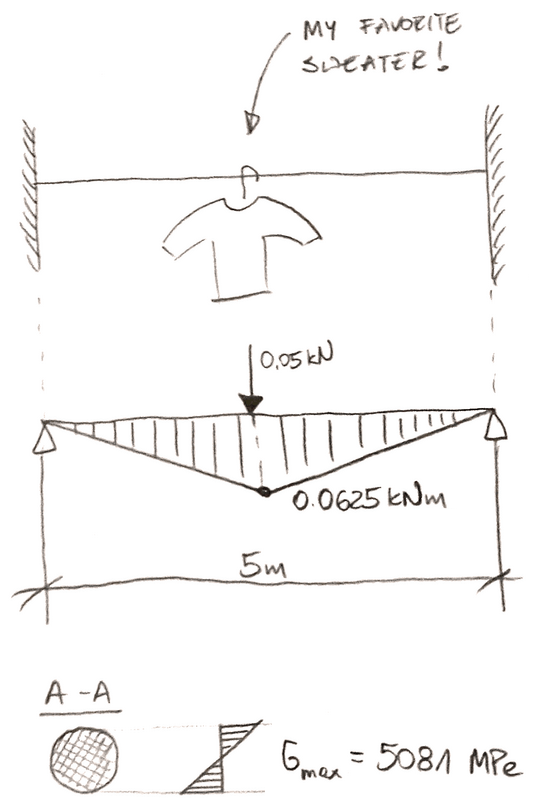 Take a look. A wet sweater is what… 5 kg? Assuming the string is 5m long that would produce a bending moment of 0.0625kNm. Seems small right? But the string is only 5mm in diameter (assuming you really have an awesome laundry string, mine is more like 3mm…). Section modulus of such cross section is 0.0123cm^3. This means that in order to carry the weight of the sweater (as a beam) the string should withstand the stress of 0.0625kNm/1.23e-8 m^3 = 5081MPa… only 20 times more than steel.

When I look at my string I rather doubt in the gigantic strength hidden within. And yet it works…

The above example is a typical linear approach to a problem. Perhaps you noticed that my example cheated a bit. I didn’t draw any deflection! In fact, it would be easy to calculate it as well. If my string would be made from steel (far from it in reality) that would be only… 20.2m.

Think how much my poor string would have to elongate to deform that much (5m string deflecting 20m?!?). This question brings us closer to understanding nonlinear geometry… where large deformations theory is being used.

When the string becomes nonlinear

You see, the string cannot elongate 20.2m as linear approach suggest. But it will elongate some for sure! As you know this elongation will cause a tensile force in the string. In turn, this tensile force will stabilize the whole thing, reducing deflections! 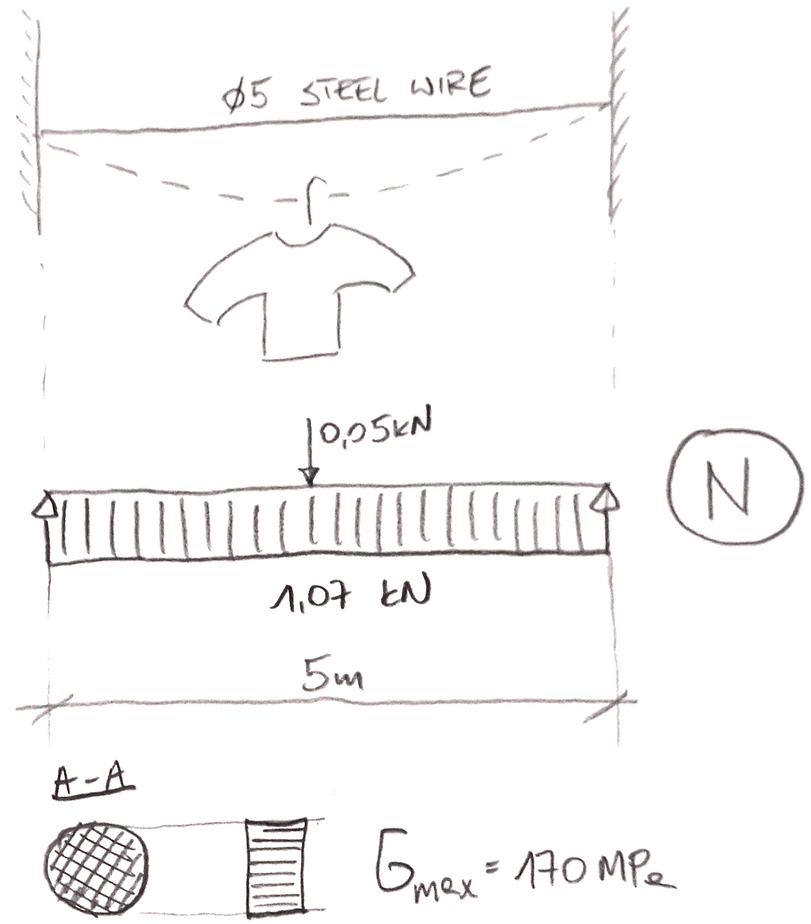 In the large deformation case above the deflection is only 57mm (when I assume my string is made from steel). For nylon, it would be around 237mm and the force in such case would be only 0.26kN (opposed to 1.07kN for steel wire).

I can easily believe that my string will somehow manage to carry the equivalent of 26kg in tension.

But how does geometrically nonlinear analysis work?

Look at the schematic above. Assuming that I have cut the string in half in the middle there is a tensile force N (the one we just calculated) pulling the string to the “inside”. On the wall where the string is attached there is a reaction force in the horizontal direction, also equal to N. Both those forces create a pair of forces, that can carry the “moment” from the load. This is a certain simplification, but it really well describes what is going on.

Look out! There is a catch!

At this point, someone could make a conclusion that nonlinear geometry is positive and by “ignoring” it, you are on the safe side. Unfortunately, this is not the case:

As always in static design – nothing is for free

Here, we “pay” for this nice nonlinear membrane effect (which help with the capacity if the string) with tensile force in supports. Do you want to verify if this is true? Try hanging laundry on the same string but in a different setup. Instead of attaching both ends to the wall lay one end simply on the table. For a typical beam, this is not a problem (table still carries the vertical force). But we all intuitively know how will it end for a string right?

This is the ultimate proof that there is a tensile horizontal force in both supports – after all this is what makes the whole system works!

Nonlinear geometry is neither positive or negative… it simply is!

Imagine you have our laundry string between two columns. If you look from the perspective of the string linear geometry is “bad” or at least “conservative”. This is because the forces you will estimate in linear design will greatly overestimate the reality. This means that you can design the string safely, even if very conservative.

On another hand for columns linear approach is actually quite optimistic. It takes into account the vertical load that will be transferred from the string, but it completely omits the horizontal force. This means that there will be no bending in columns, and that will lead to not conservative design in linear static.

As you can see nonlinear geometry “helps” the string and “hinders” the columns. Unfortunately, you can’t pick if you want to use it or not… it is always there!

Here a word of comment is needed. Assuming that following the linear static you would design the string to withstand the moment calculated as for the beam (in linear case). Then we would no longer have a “string” but a “beam”. Such case would lead to far smaller deflections and in turn the horizontal force on columns would be much smaller. Perhaps even negligible or not even there.

This is why the use of static design is possible:

In this example, there is something else we should consider. If the columns would be heavily loaded in the vertical direction, deflection seen in nonlinear approach would introduce an eccentricity in the columns. This would lead to additional bending (often called second-order bending or secondary bending) that in some cases may be very important. This is also a geometrically nonlinear effect.

To sum this up

The geometrically nonlinear analysis is a very useful tool in structural design. If you encounter elements that deflect a lot in their load-caring process this is the best approach. If linear approach would be correct in your case, you will get the same outcomes from the geometrically nonlinear analysis. However, if the case should use this nonlinearity, then this is the only option for a correct solution.

It is also great in dealing with secondary bending, where deformations of the model cause loads perpendicular to deformation direction cause additional bending.

In structural design, there is also a nice debate about linear/nonlinear buckling, which is strongly connected to linear/nonlinear geometry in the analysis. This is the topic I described elsewhere as I focused here on stress design mostly.