Materially nonlinear analysis – how does it work

When people think about nonlinear analysis usually what first comes to mind is material nonlinearity. This is the most “visible” aspect of nonlinearity in calculations. I won’t dare to say that materially nonlinear analysis is the most important one (I think that there is not such thing), but without a doubt, this is an important part of engineering knowledge. Let’s learn how does this analysis works, and what it really means

There are so many aspects of material nonlinearity that to this day it makes my head spin! With all honesty, I can tell you that I have no experience with a lot of those aspects, as it will take years for me to gain experience in many fields (still working on it!).

I’m a civil engineer with steel structures background so for me mostly material nonlinearity connects with yielding. This is what I will focus on here. If you happen to have vast experience with different aspect, and you are willing to share knowledge let me know, it would be great to host you here 🙂

Below you can expect a simple language explanation without a complex theory of how material nonlinearity works. If you are interested in different nonlinear material models in FEA go here. 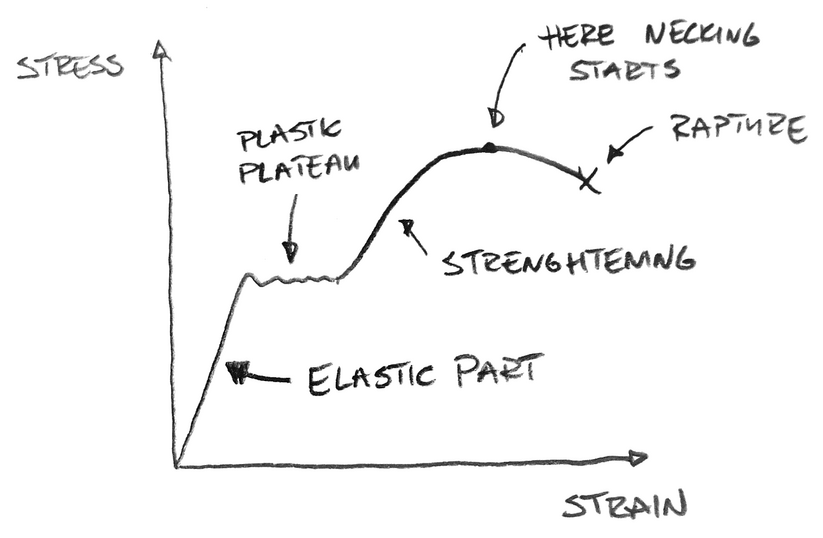 I won’t go into a lot of detail here. I’m pretty sure that if you are into engineering you already saw this chart… hundreds of times! This is an engineering stress-strain curve for steel. It can also be drawn as true stress – true strain curve but this is not the topic for today. Fortunately, in the part, we will use the curve today this difference is insignificant.

The important part is that there is an elastic part (where stress is proportional to strains), plastic plateau (where plastic strain develops with almost no change in material stress) and then the strengthening and necking.

I will mostly focus today on 2 parts of this chart – the elastic part and a plastic plateau. This means that for the limited strains I could treat my steel as a bi-linear material with the following characteristic:

This is a typical bilinear elastoplastic model. Sometimes a work hardening is used (the plastic plateau line is not horizontal but inclines slightly). You can read more about it in the post I mentioned at the beginning.

The bilinear elastoplastic model works only to a certain maximal plastic strain (at which strengthening starts). I marked it as “max allowed plastic strain” on the left chart. For now, I assume that our model won’t reach such a high strain value. In real analysis, this is checked simply by displaying plastic strain values and checking the maximal values in the place of interest. As you see on the chart on the right for higher plastic strain values model will act as if the plastic plateau is infinite. This can have a negative influence on the accuracy of the outcomes so checking max plastic strain is a good idea.

Many materials have a nonlinear stress-strain curve. Most are stiffer first and gradually became less stiff as the stress increases. However, steel has an incredible trick up in its sleeve – it can yield.

Yielding means, that steel material will maintain the stress (so the capacity remains the same) but will increase the strain. This is a huge advantage. There are a lot of benefits to yielding (and some issues of course!) but here I will focus on aspects concerning plastic stress distribution.

Think about it this way: 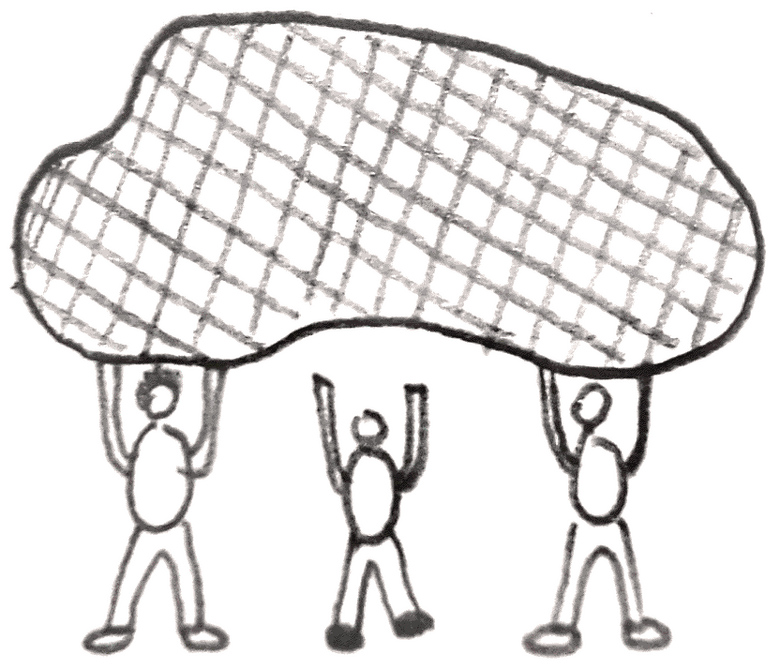 3 guys keep a stone over their head. The middle one is too short to reach the stone, so he basically does nothing, while taller guys on the sides carry all the weight. Imagine that they represent a brittle material and the stone is too heavy. First, the 2 tall guys would be overwhelmed and then the middle guy alone would be hopeless against the weight of the stone. However, as I wrote before:

In our example that would mean that both tall guys can squat while still holding the stone! In this way, the stone will go lower and finally, the guy in the middle will be able to help out… and now 3 guys are carrying the stone, not two! 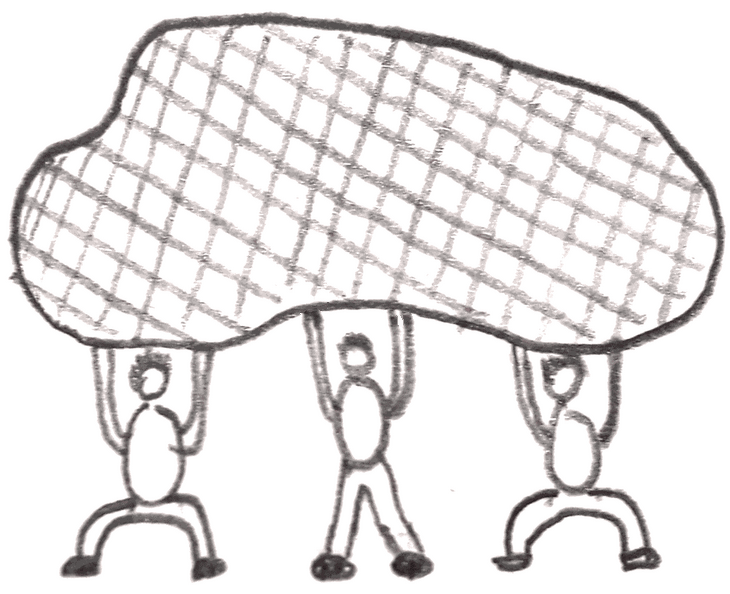 This is called plastic redistribution or plastic adjustment. There are limits to this of course:

How materially nonlinear analysis works in an element

Analogies are very useful but let’s see how this really work in a steel element. The simplest example is a beam in bending: 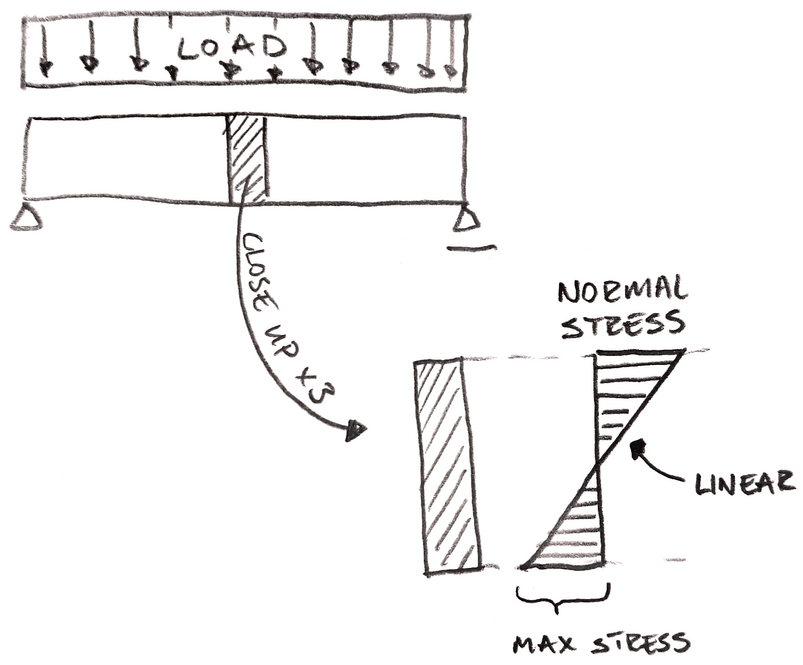 As you can see the stress on the bottom and top edge of cross section are highest, while in the middle stresses are gradually smaller. This is clearly an elastic state.

To explain how plasticity works we need to make a small experiment. Imagine I will cut a small section of the beam, somewhere in the middle. Bending means that the “vertical sides” of our cut-out section want to rotate like this (of course, deformations are completely out of scale, but we want to see them!): 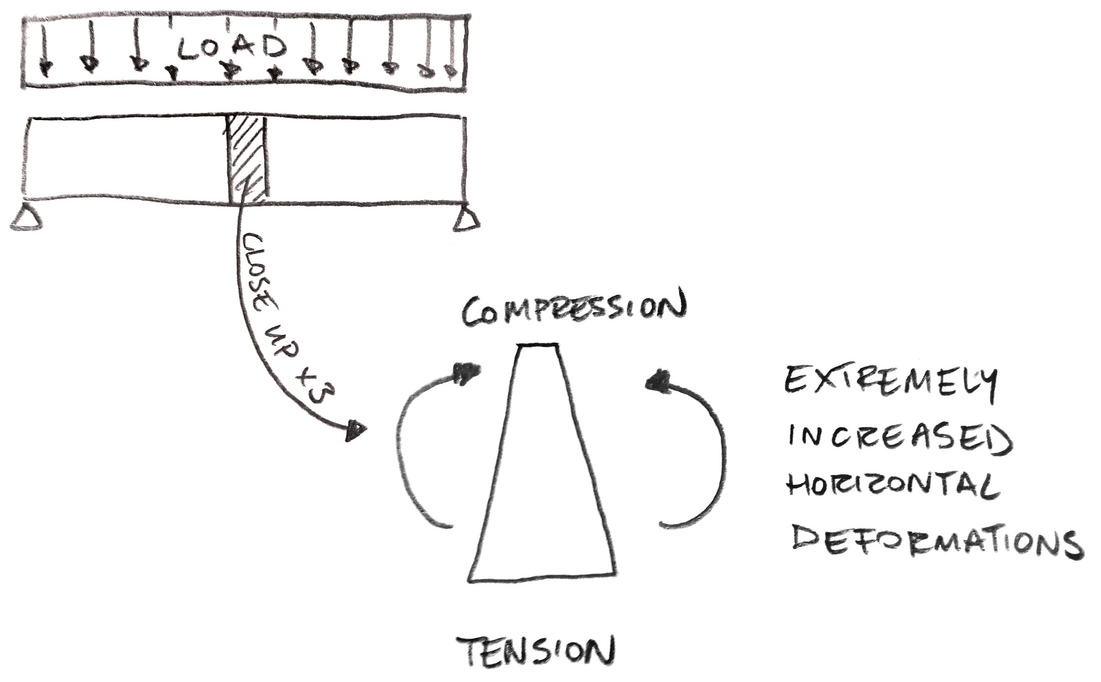 Now I will cut this small piece in several horizontal layers. I will also measure strain is those layers. The strain is basically a difference between the “original undeformed shape” and “deformed shape when bending is applied” in relation to original length. You can easily observe that the outer layers (1 and 7) deform a lot (so the strain are high). Strain decreases when we move toward the middle of the cross section. 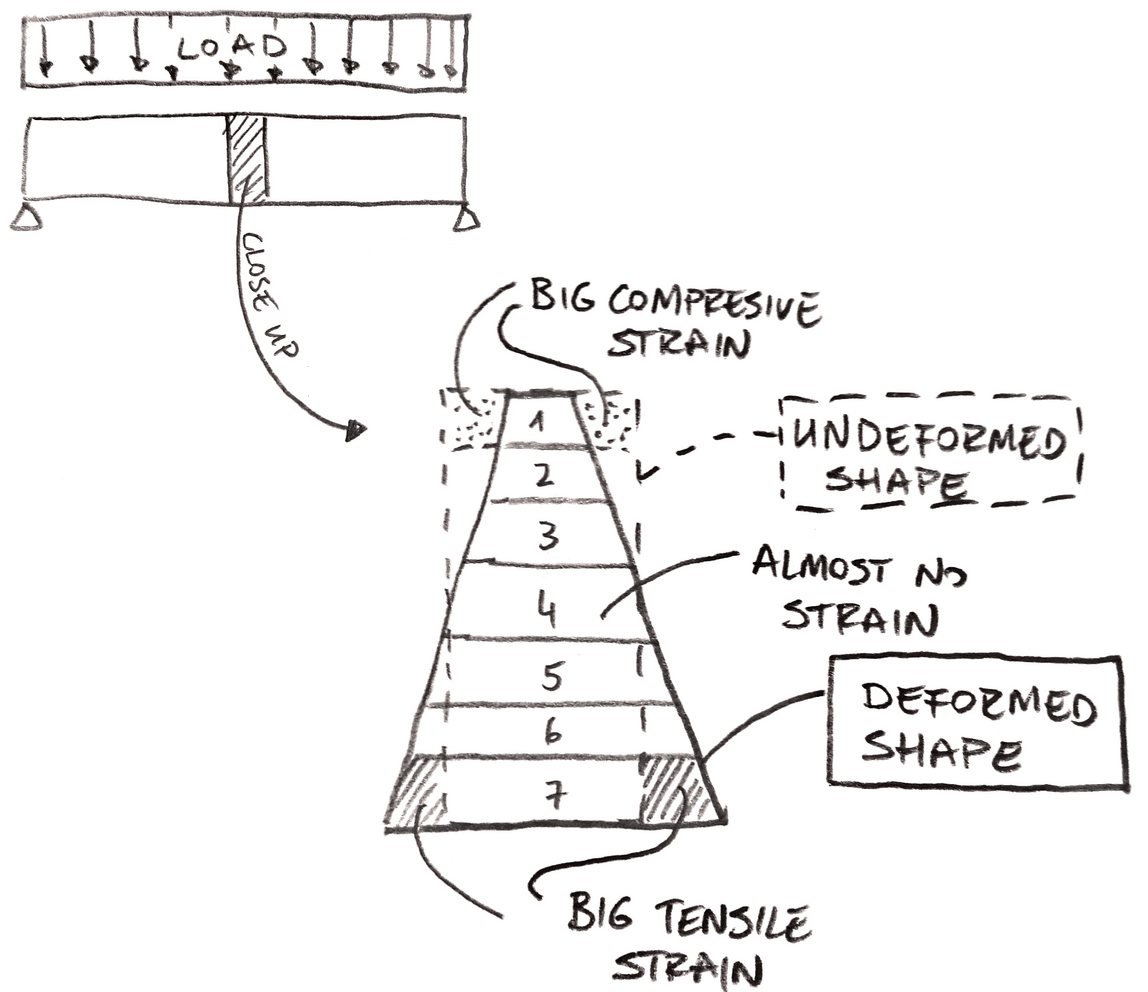 We assumed that cross-sections will remain flat in bending. This means that almost vertical sides of section cut-out will remain straight lines. This is a reasonable assumption. Armed with that knowledge we know, that increasing strain in layer 1 by a factor of 2, we will increase strain in each layer by the same factor. In other words strain in our cross section looks like this:

So let’s go back to the bi-linear stress-strain curve for steel we adopted for this task. When the material is in the elastic zone stress increases proportionally to strain. But when we reach plastic plateau strain is increasing, but stress remains the same. 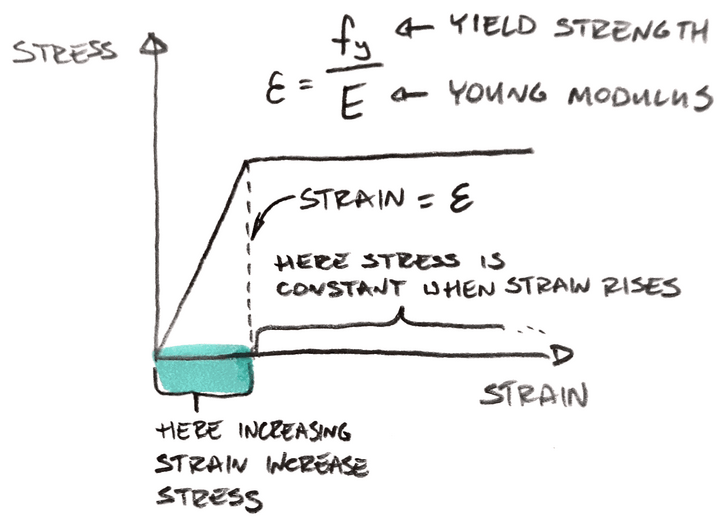 There is a limit value for strain were yielding occurs. It is very easy to calculate as you can see above. Since we already know strains are changing in any cross-section lets see how this influences stress distribution in the same cross-section: 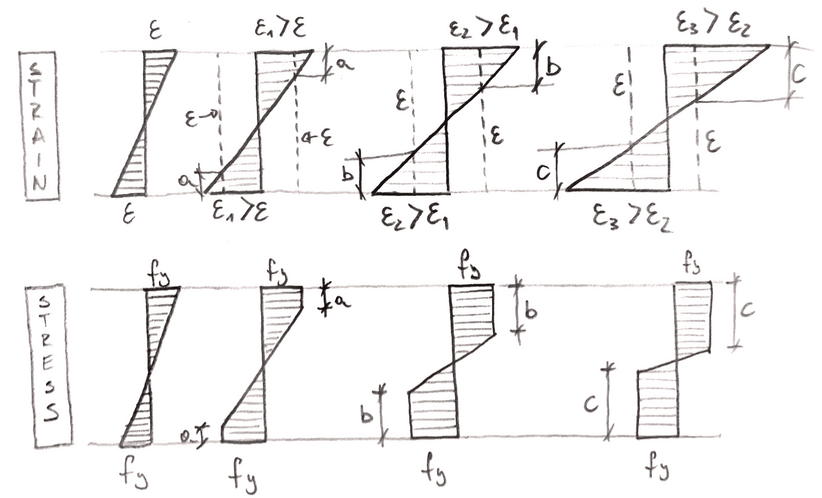 As you can see at the beginning there was a very high stress at the outer parts of the cross-section, while the middle section did nothing. This is a similar case as with the 3 guys keeping the stone above their heads. With increased strain (for our 3 friends that would be squatting) steel is still able to carry the stress. However, there is a benefit – the higher the strain the more of the cross-section actually carry the weight! Higher strain in the outer edges allows the inside of the cross section to be strained as well. This way the stress appears there as well and helps with carrying of the bending. Just as the shorter guy in the middle did!

This is not a small effect – for a rectangle, you get additional 50% of capacity due to bending this way! For an I-beam that will be more like 6-10%, but still something worth remembering 🙂

Material nonlinearity is fun! I hope that I managed to show you something worth your time reading this. To sum this up, the most important highlights:

I have a free nonlinear FEA course for you! Subscribe below to get it!