A few years ago I wrote an article about various nonlinear material models. Since I’m a civil engineer to me the obvious dividing line was: linear = no yielding, nonlinear = yielding. But of course, there is far more than that! Today let’s take a look at a nonlinear elastic material.

I think it’s worth taking a look, because confusing nonlinear elastic material and a plastic material may produce some funky outcomes in some analysis.

All the perks of being elastic!

Firstly, let’s take a look at what it means that the material is being elastic. As Captain Obvious often says:

You can read a bit more on the wiki page for elasticity.

Being elastic is actually a super neat feature! Especially since usually high-ductility is praised (i.e. in steel structures), we take elasticity for granted. This is however not always the case, even though each material has at least a very slight elastic portion of the stress-strain curve.

Without a doubt, the simplest approach to elasticity is linear-elasticity. This is a property that means that the relationship between stress and strain in the material is linear. Before a certain strain level, (sometimes small, sometimes pretty big) materials tend to “start” their strain-stress behavior win a linear way. Often, it’s only the question at which strain level materials stop being linearly elastic. When this “limit strain” is reached material will either break, yield (which means it’s not elastic anymore) or it will start behaving in a nonlinear elastic way.

I think that it’s best to discuss linear elasticity on brittle materials (like glass). Then, the stress-strain relation looks like this: 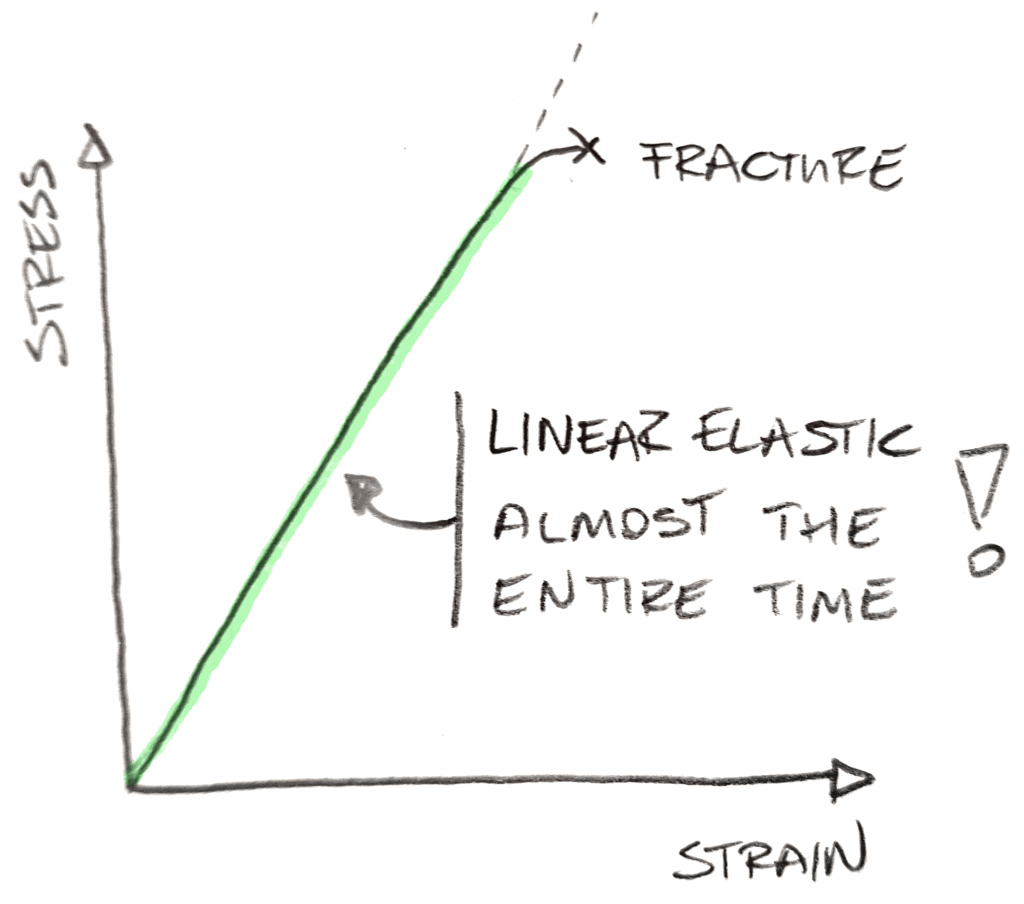 I think it’s reasonable to say that material with such properties can be modeled using linear elastic parameters. OK, there is this small portion near failure that won’t be accurately captured, but I would still be satisfied with the model. Unless of course, this “small portion” won’t be small anymore. But we will discuss that in a second : )

Linear elastic up to a point!

Of course, there are far more material types. Brittle materials are not the only ones you can describe with linear elasticity. However, for the rest, it might be a bit more tricky! I would say that there is a big group of materials (like metals) that are linear elastics “up to a point” and then… they start behaving in a nonlinear way!

The classical example for me would be the structural steel. 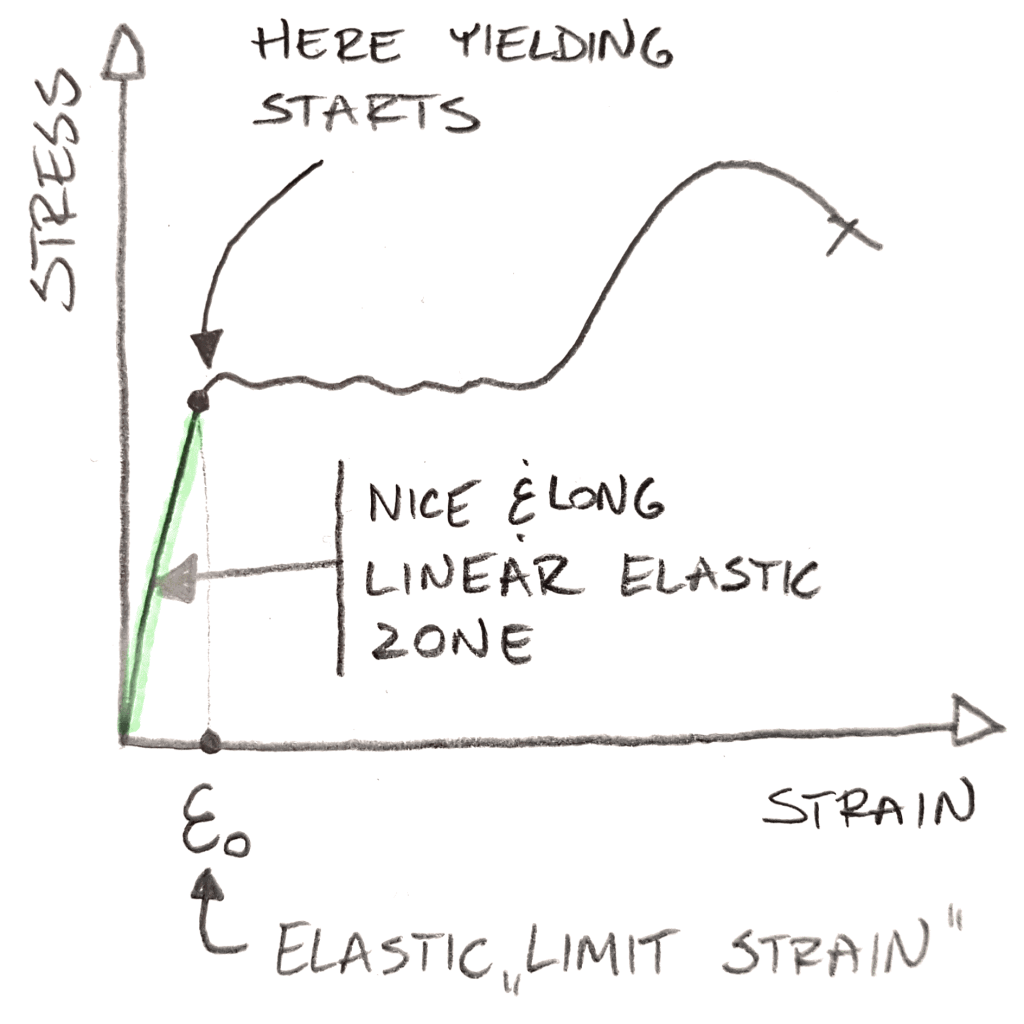 …but I don’t want to go into yielding today. This is a completely different story! No worries though. You can learn plenty about yielding on the blog:

And since we are into other resources, definitely check out my FREE introduction to nonlinear FEA course. You can get it by signing down below:

Not linear… but still elastic!

This is a fun category. I would include plastics and foams here. As I mentioned before, steel has a small section “just before yielding” where it’s not linearly elastic anymore. But this “spot” is so small that we can easily ignore it. The similar thing happens with plastics, but there, the zone is so big you just can’t “ignore it”! 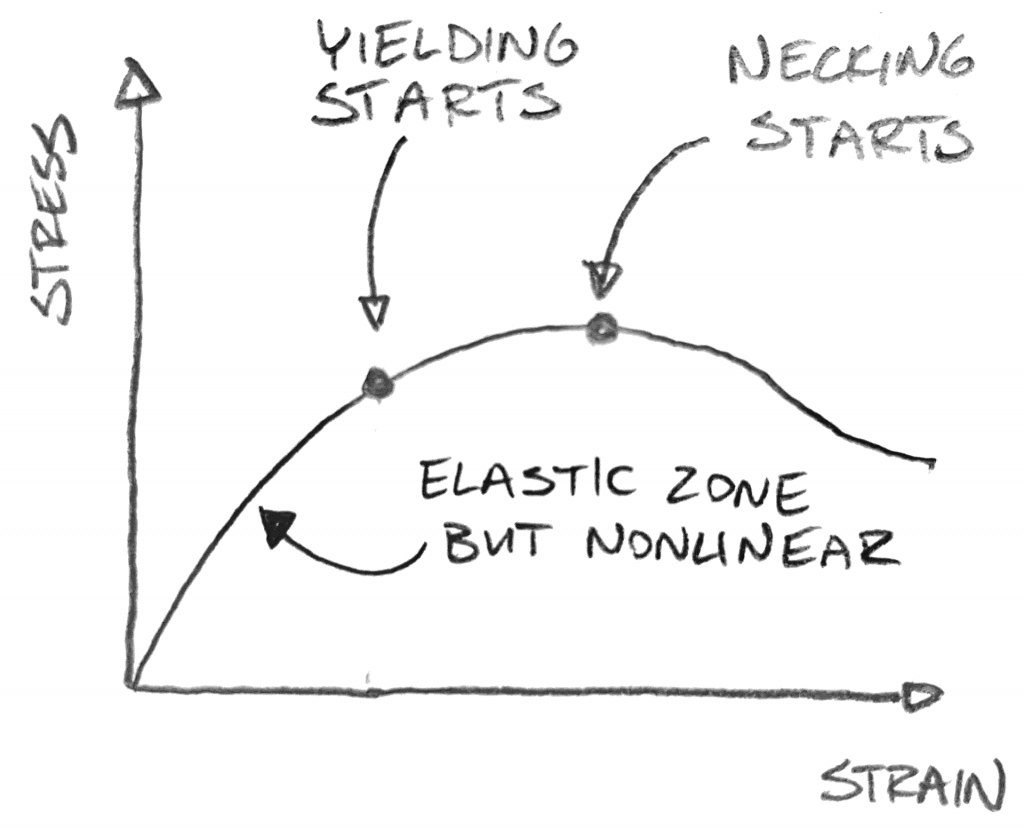 You could argue that in the plastics there is no “linear elastic” part but of course, it’s only the problem of accuracy. After all plastic parts are analyzed using linear elastic parameters as well. It’s clear, that the nonlinear elastic material should be used, but instead, there are two other possibilities: tangent and secant rigidity. 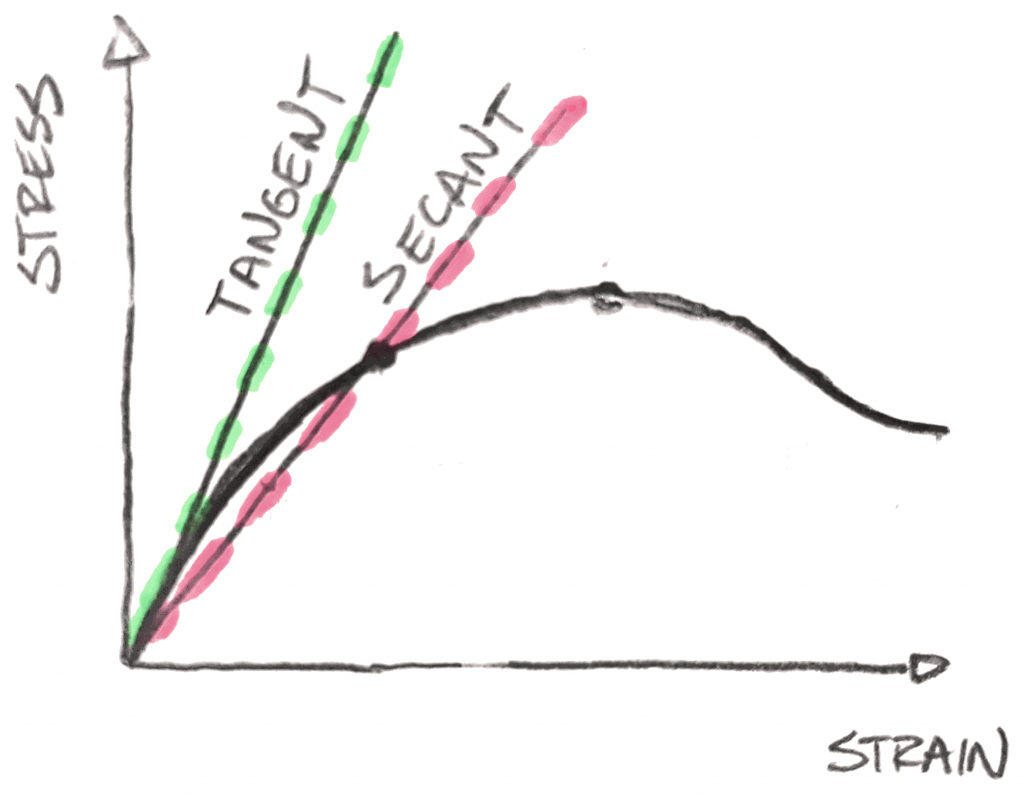 What you do in this case is pretty simple. You can either assume that at the very beginning the material stiffness is “ok”. In such a case you will use the tangent stiffness. However, if you expect that the strains will be high (i.e. close to the start of yielding), then “tangent” stiffness isn’t very accurate. Instead, you could use the secant stiffness. This one is better for higher strains but shows too soft material behavior beforehand.

All in all both approaches aren’t great, but sometimes they may be sufficient. This is the point where actually using nonlinear elastic material model may come in handy. Similarly to steel discussed before, yielding will take place here as well, making the material model pretty interesting… assuming you want to go so far with stresses and strains in your design.

The previous model may look very complex, but that’s not all. There is another material group I want to mention here, and those would be foams. There are more interesting, mostly because certain types of foam never yield. This means that their entire behavior is elastic.

But of course, the behavior is highly nonlinear… otherwise where would be the fun in that, right?

In the above, using tangent or secant stiffness doesn’t look appealing right? I mean sure, if you are somewhere pretty close to the beginning, maybe there is an argument to be made… but it wouldn’t be the best one!

But there is also one additional behavior I want to point out to. Plastics have it as well, but it looks nicer on this chart, so let’s make a small update! 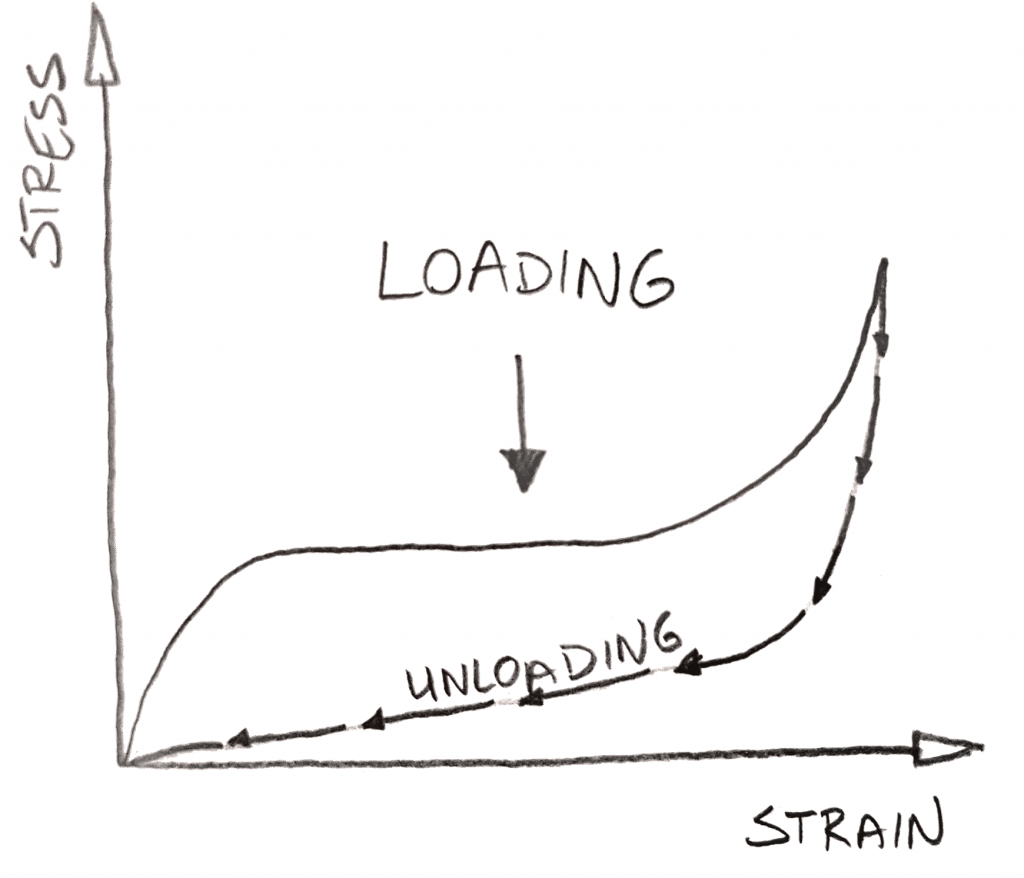 You see, the foam is elastic. It means that when compressed and then released, will return to its original shape without any permanent deformations. But it’s not the same “elastic” as in case of the elastic range for steel element. When the load is taken away from a steel member loaded within the elastic range it behaves differently!

You can model it in FEA if you really want to, but it’s rather complex stuff.

If you would want to analyze rubber or maybe elastomers the best way to approach those is with the hyperelastic material.

There are several material models like Mooney-Rivlin, Ogden or Arruda-Boyce.

Sadly I won’t be able to help you out here – this is completely not what I do at my work or have to experience with, and I don’t really want to tell you things I’m not sure about. I promised myself that one day I will take a look at those and learn about them… but there was always something with the higher priority on my to-learn list.

If I ever learn more, I will be more than happy to get back here and add something interesting : )

If you happen to have practical experience with those materials let me know – I will gladly host you on the blog!

Is a linear elastic model enough?

This is a pretty difficult question to answer. In general… if you have doubts, most likely no!

I would say this: if you know the stress-strain curve for your material you can easily judge if the linear approximation is sufficient. In many cases, it may be. I mean, you don’t always need to have a “perfect” answer, and a simple approximation is often enough. It’s just good to be aware of what you are “missing” in simplifying the problem to the linear elastic response.

You may want to check out my Nonlinear Material Flow Chart that will help you decide will linear elastic material model is enough for your analysis!

Where to get the material parameters from?

This is a good one. It’s not simple really. I mean you can easily google for Young Modulus or yield strength of the material of interest… but beyond that things are more difficult to come by. Not to mention that there is also an issue of “trust” when data from the internet has to be used.

For steel, you can always check DNV – RP – C208 there are some really interesting data for steel there. But for other materials, sadly I don’t know. If you have any interesting reference, let us know in the comments!