This is something special – first time on my blog I have a post done by someone else! Do you recall that Boris Jakimov made it to the hall of fame in the snap-through challenge? We talked a bit afterwards, and this is the result!

I won’t edit Boris work*… but I will add some (hopefully!) witty and funny comments as quotes (like this one).

One of the most common uses of material nonlinearity is considering plasticity phenomena. This post will cover one of the most simple cases we can encounter – simple tension of a standard tensile specimen.

The specimen will be stretched and compressed above the elastic limit and two hardening rules will be considered – Isotropic and Kinematic.

And so… the acient battle between isotropic and kinematic hardening is upon us : )

But first, we need a model to work with…

Standard Aluminum engineering stress-strain values are used to model the bilinear material model. Bilinear material model is commonly used when no detailed data about the elastoplastic region behavior is available. It also proved to be a very good approximation of an Aluminum real-life material behavior. All we need are the Elastic Young’s Modulus, Yield point, and a Fracture stress point. Also, Poisson’s ratio is necessary for the complete definition of an isotropic material.

I really like bilinear material model. Even through there are better ones, I still think this is great. Unless of course you need more – but I use more complex models only in very specyfic situations (like Customer request… which actually happened to me once!). 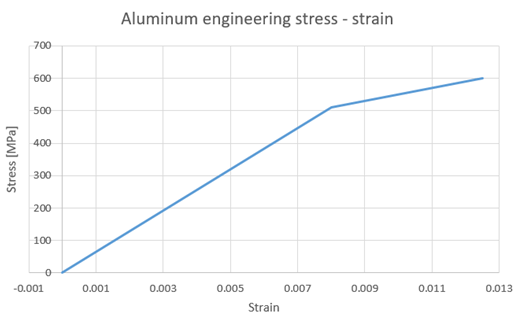 As mentioned, a standard tensile specimen geometry is used. 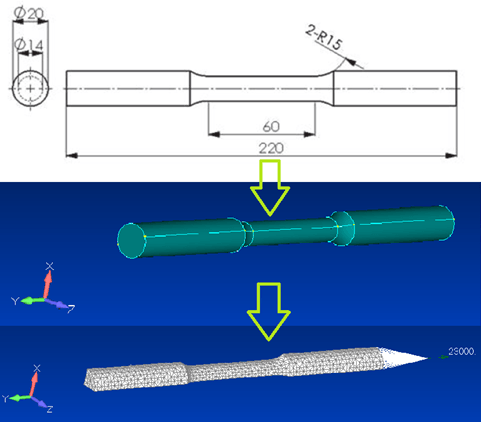 Experiments show that a linear elastic model is only good for stress values bellow yield stress value. Up until that value, all the strains are elastic and the relationship between stress and strain can be expressed by Hooke’s law. Once yield stress is reached, the elasto-plastic law covers the relationship between stress increment and now a combination of elastic and plastic strain. 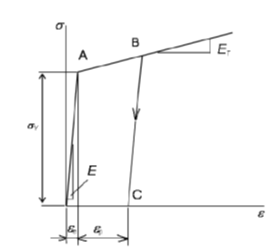 This post is dealing with a specimen modeled with an isotropic material, which means that the material behaves the same way in tension and compression, and in all directions. This is a very important piece of information since everything stated here for the one dimension case will be absolutely applicable for more complex cases.

The basic premise when describing structure behavior out of linear elasticity region is that the total strain is divided into an elastic portion and a plastic portion!

I know I get anxious when there are dx values on the drawings!

No worries, this is simple – linear deformation is purely elastic (index is “e”). But when you reach yield, most of the deformation from then on will be plastic (index “p”). Such deformation won’t “release” to the oryginal shape when you take the load away.

Usually, people think that after yield all of the doformation is plastic, but this is not the case. A very small portion of it is still “elastic” and will go back – and this is shown on the drawing above : )

Just a little bit of math is necessary…

Challange accepted! I will try to discuss isotropic and kinematic hardening without math someday…

For now a historical moment…

… Ladies and Gentlemen! For the first time in history! Enterfea blog hosts a *differential equation*!

(no worries though, it will be quick : P)

For the uniaxial case we have the linear elastic modulus:

and the tangent modulus:

From where we see a very important new parameter – Plasticity modulus! For a bilinear material model it is represented: 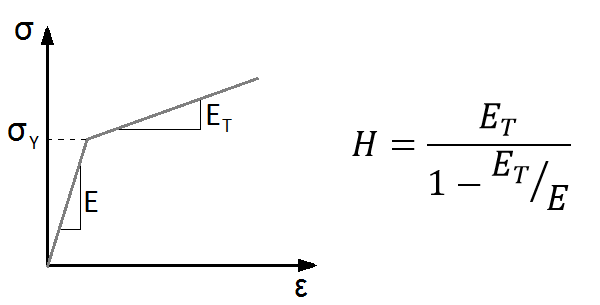 Boris actually used chart I did for this post… how cool is that!

Mathematically speaking, leaving the elastic region can be expressed by a scalar function called Yield function F, which states a condition:

The most famous yield criterion is Von Misses (or J2 flow theory, but more on that some other time) and it states:

where σ1/2/3  are principal stresses and σy is a yield strength of course.

Each yield criterion is a function of the stress tensor and a material parameter (obtained by an experiment) and defines a surface described by principal stresses.

Every stress state that can be plotted inside the yield surface is considered to be in the elastic region! 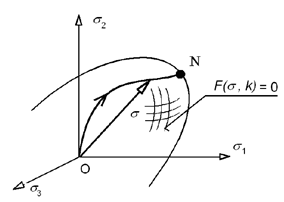 This took me a while to process. Idea here is simple:

If the von Mises stress is lower than yield… you are in elastic zone. It’s simply shown here as a graph 🙂

Isotropic hardening rule states that the yield surface expands proportionally in all directions when yield stress is exceeded. We can describe a schematic representation: 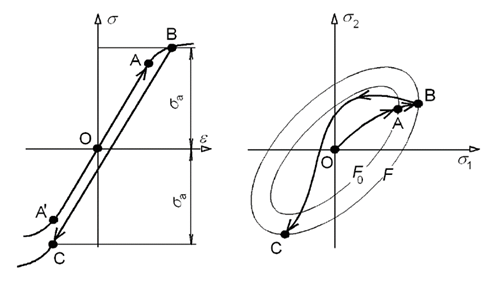 Though it may not be clear at first glimpse, after yield stress is exceeded and the yield surface has expanded, we get a ‘bigger’ elastic region and a new yield stress!

To prove what we just stated let’s finally fire up the FEA software and try to simulate what we have already theoretically specified. We will first load the specimen in tension above the initial yield stress denoted as σyo , that we will unload it, present the plastic permanent strains and load it in tension once more to prove the existence of the new yield stress denoted as σy1.

The outcomes can be shown on a graph: 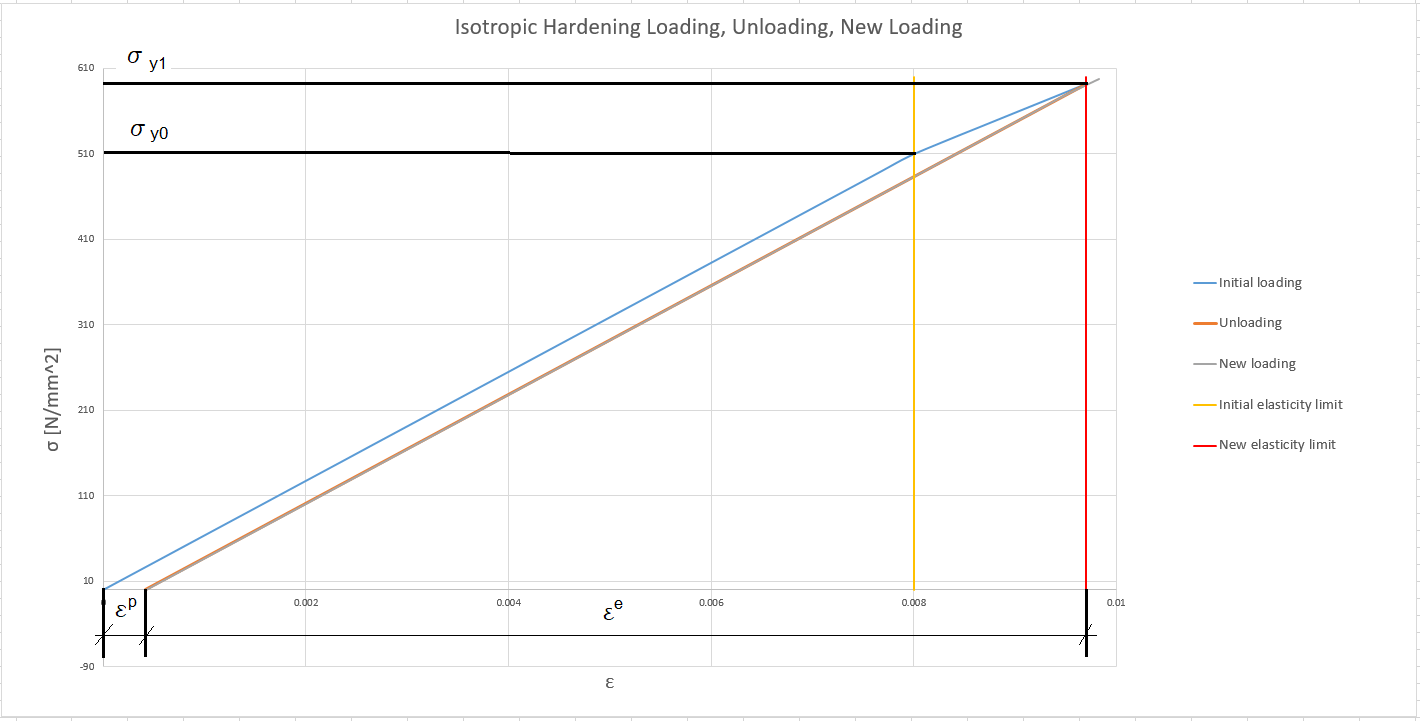 Notice that first yield was at stress with index y0, while after unloading elastic region got “expanded” to the y1 “level”. This is why the “elastic zone expands”.

This however would be the same both for isotropic and kinematic hardening… The difference comes later!

Let’s test it even more!

Now that we have seen what happens with new tension when the elastic limit has previously been exceeded, let’s see what happens if we now load the specimen in compression.

Remember that we stated how the yield surface expands proportionally in all directions, and considering that with uniaxial compression we ‘move’ along the same x-axis representing the principal axis, we should reach an elastic limit at the same distance from the x-axis when compressing at the new yield point! 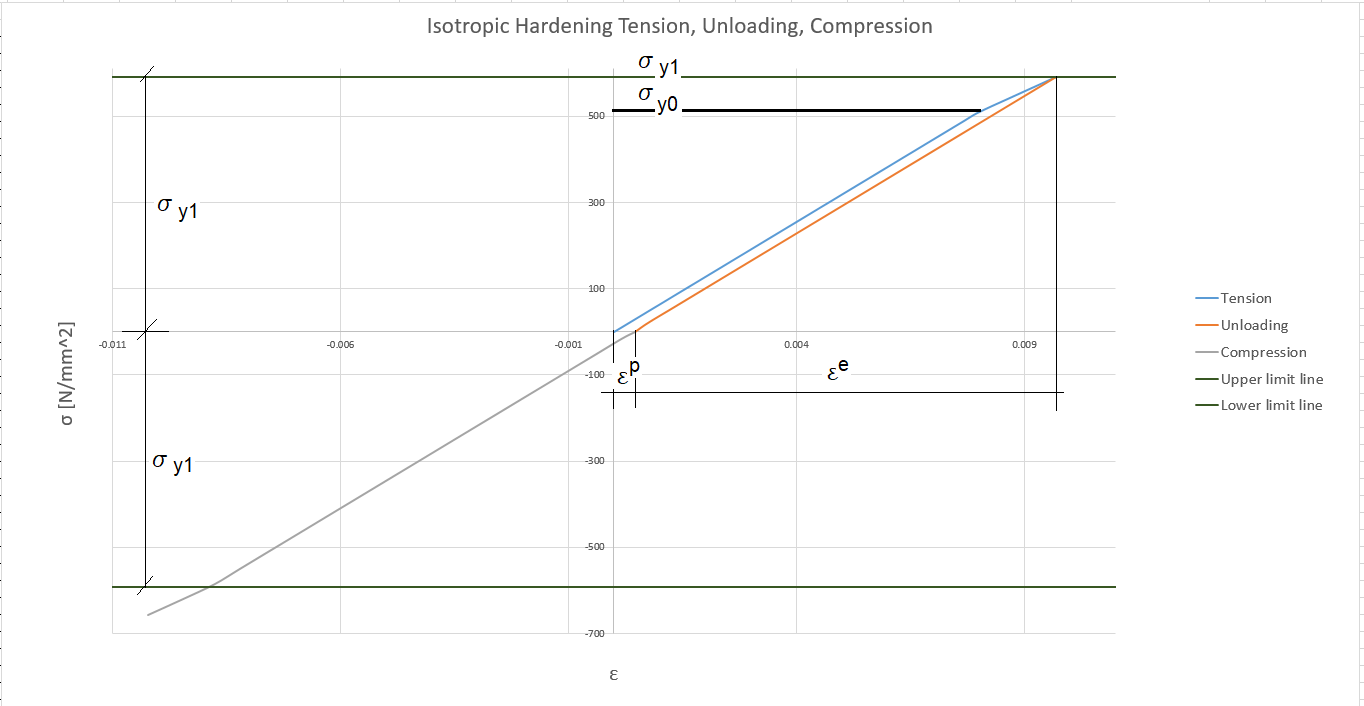 We can also plot plastic strains and see that they are present and form only when the elastic limit is exceeded: 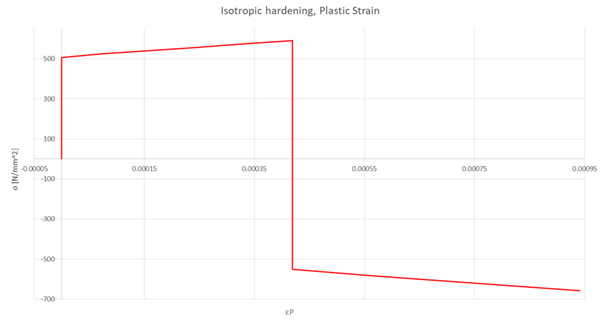 Without the fancy graphs one could simply state:

If you load your model beyond yield and then unload you will “strenthten the model”.

The next time you apply the same load, it will move completely in an elastic zone.

Isotropic hardening says this: if you apply tension, next time the elastic limit will be higher both for tension and for compression!

Now, Kinematic hardening rule states that the yield surface does not exceed, but translates in the direction of the stress rising and stays in the same area and shape. A schematic representation can be formed: 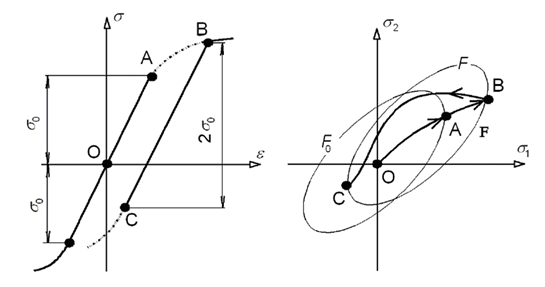 Note now, we move along the principal axis (x-axis), so if we try and replicate the tension, unloading, and new loading experiment we would get the exact same result as with the isotropic hardening rule since the yield surface is translated in the x-direction just as much as the surface would expand in the previous case.

Since the surface does not expand, but only translates, when unloaded and then loaded in compression the elastic limit should be reached earlier than in the previous case. Also, although we have a new yield stress the distance between two elastic limits should stay 2 σ0. 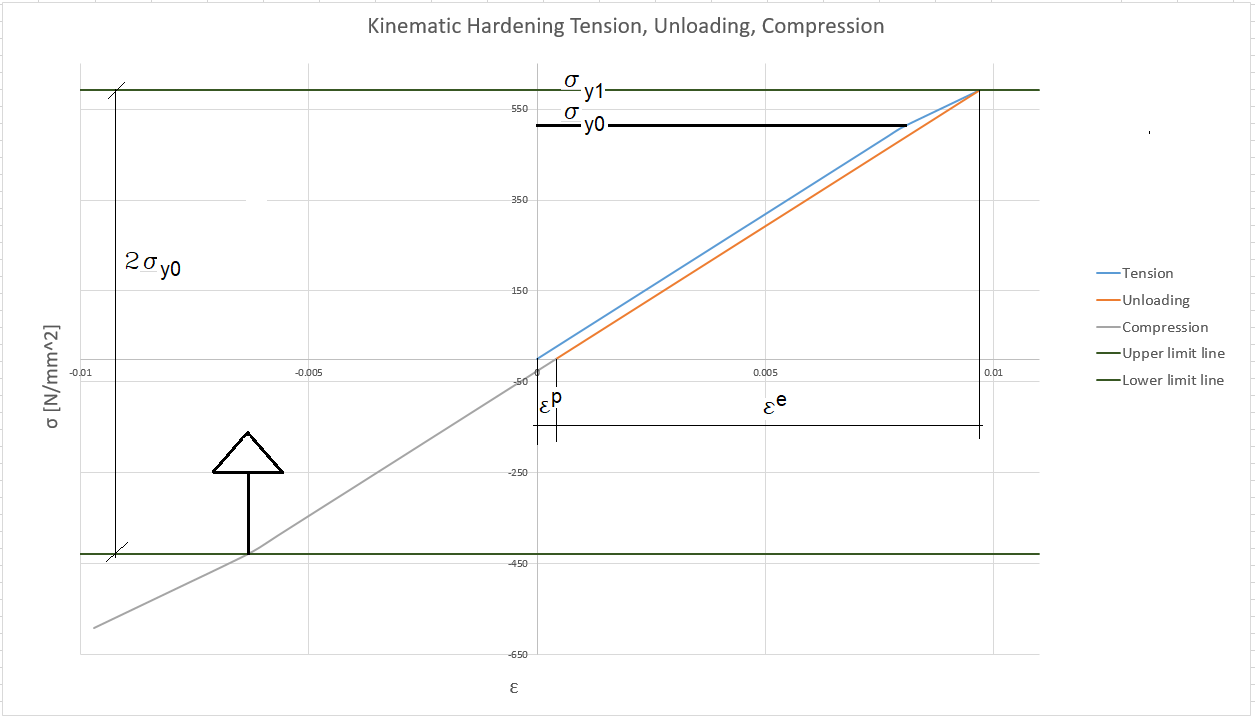 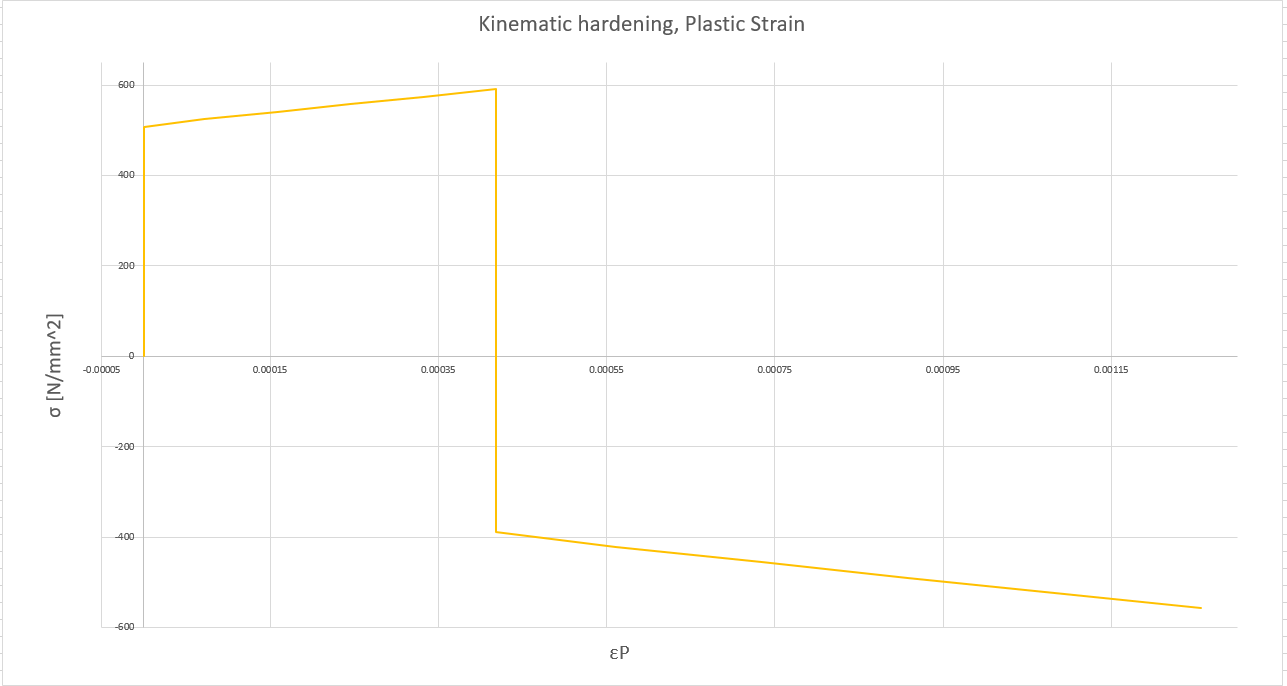 The start is obviously the same, but kinematic hardening rule states something else:

If you apply load in tension, reach yield limit you will “strenghten” the material this way. The next time you apply tension, elastic zone will be bigger! (sounds like isotropic hardnieng right?)

But… there is a price to pay (lighting blast behing the window)! If you strengthen the material by appliying tensile yileding… elastic zone for “compression” will be lower! It won’t even remain “where it always been”… it will actually have a lower value than before!

Maybe the best representation of the whole post can be seen on the following diagram, where we see that plastic strains in the case of Kinematic hardening rule when compression is initiated are reached earlier! 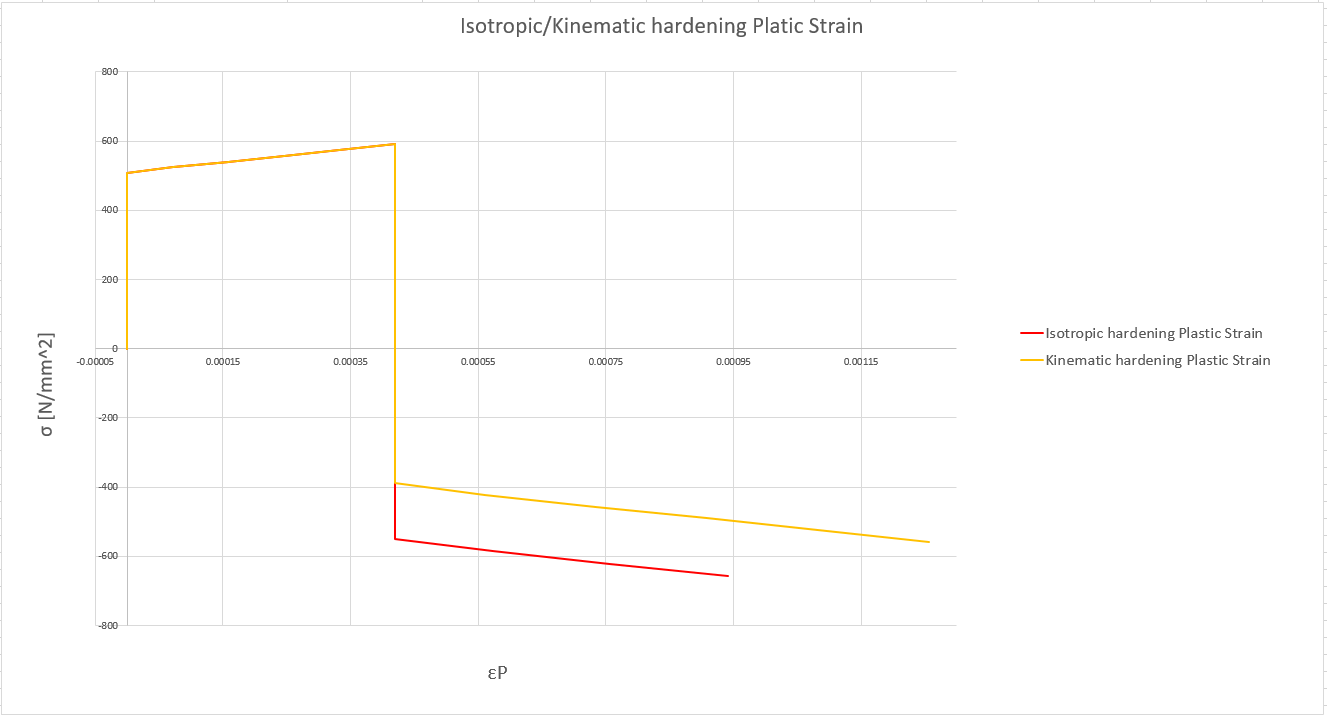 This menas, that selecting isotropic or kinematic hardening is important only if you are expecting the load to change direction. If we would only load and unload a model in tension or compression (but not both) both hardening rules give the same outcomes.

BUT… if you want to load your model till yielding and beyond, and then change the load direction this is important!

Kinematic hardening will increase yield in one load direction, but will reduce it in the other load direction (regardless if you apply tension or compression first – it will act the same way for both!).

Last few words (this is mine… couldn’t help it!)

I’m pretty excited to host Boris post on the blog. I think it may be useful for you. It’s definitely good to know, that such things as hardening rules exist… even if you won’t use them. It simply expands views on certain things! Not to mention that now you know why you cannot use “plastic hinges” in structures that are subject to changing loads : )

BTW truth is always a bit more complex! Neither rule is actually correct as far as I know – the truth lies somewhere “in-between”. This is why some FEA systems allow you to pick a third option “mixed hardening” using both approaches to some degree at the same time : )

I think Boris will be very happy if you would write few words of encouragement below in the comments.

Also, if you like the idea of guest posts – let me know! Perhaps you would like to write a post on the blog? If so, just drop me an email at: enterfea@enterfea.com!

Have a great day!
Ł