Design your silos with FEA – it pays!

Designing steel silos with analytical approach always yields very conservative results. Nonlinear Finite Element Method allow for great optimization of those structures (and other shell structures as well!). I will discuss this based on a silo I have recently designed.

I will describe advantages of the nonlinear numerical design of shells based on silos I have designed not so long ago. Below a picture of the structure:

History of designing silo with analytical equations is fascinating (at least for me :P). This is however not the main topic. Instead of going through all equations in EN 1993-4-1 or other similar codes I will simply give you a short history. If this doesn’t interest you, skip this part 🙂

All I wish to say here is, that up to this day we are using Timoshenko equation for critical buckling load of ideal uniformly supported/loaded shell. This is important, not only because the equation is almost 100 years old (equation for square area is somewhat older and still works), but also because this is the only closed analytical solution we have. In other words, if you want to design a shell that is supported on columns (like a silo) or not uniformly compressed from the top (a bit like a silo, I’m not picky) then… tough luck – there is no solution.

This leads to fabulous stories on how people tried to get around it. There were failures, some success, and shocks. I.e. in 1992 Samuelson and Eggwertz published a book Shell Stability Handbook. They proved that stress in shells does not spread at 45 deg angle but far steeper, meaning that concentrated stress… tends to remain concentrated with height. I can only imagine how bad a day in work I would have when I would learn that after designing several silos… I won’t even start describing the point when we realized how greatly shell capacity drops with imperfections.

Generally, silos design is made in steps as shown below. If you are interested in post showing and describing all equations as well leave a mark in the comments.

Pretty reasonable right? There are few issues with this approach, but all in all, this is a doable process.

Note however that it still uses Timoshenko equation and adapts it for the purposes of discretely supported shells. This is done with imperfection reduction factor (its value is somewhat dependent on stress distribution along shell circumference). This is the place where conservative approach appears, as such adaptation must be made on the safe side. This means the equations are “ready” for a worst case, while your case is most likely not as bad 🙂

For our silos, analytical capacity ratio due to vertical compression near column support is 117%. Sounds bad, right?

This is why I like Eurocodes so much (even though I am aware of all of the flaws). They allow for numerical design. Plain and simple. Code EN 1993-1-6 clearly describe what analysis should be performed, and when you can assume the capacity is sufficient. Also, those are not rules saying how much overstress (stress above yield limit) you may have here and there. A full-blown nonlinear analysis with imperfections is required.

This is really great 🙂 Even through nonlinear analysis isn’t the easiest approach, the benefits are incredible! Again I don’t want to go into details about how to do what – if you are interested take my free FEA course!

The steps for FEA design are as follows:

After all this work you look at the final stability path from GMNIA and you simply read the maximal load multiplier. Few factors later you have your designed capacity.

This means that the same capacity of the same silos under the same conditions is 50% higher when you calculate it with nonlinear finite element analysis. I think it is well worth the hassle, as material savings are significant! 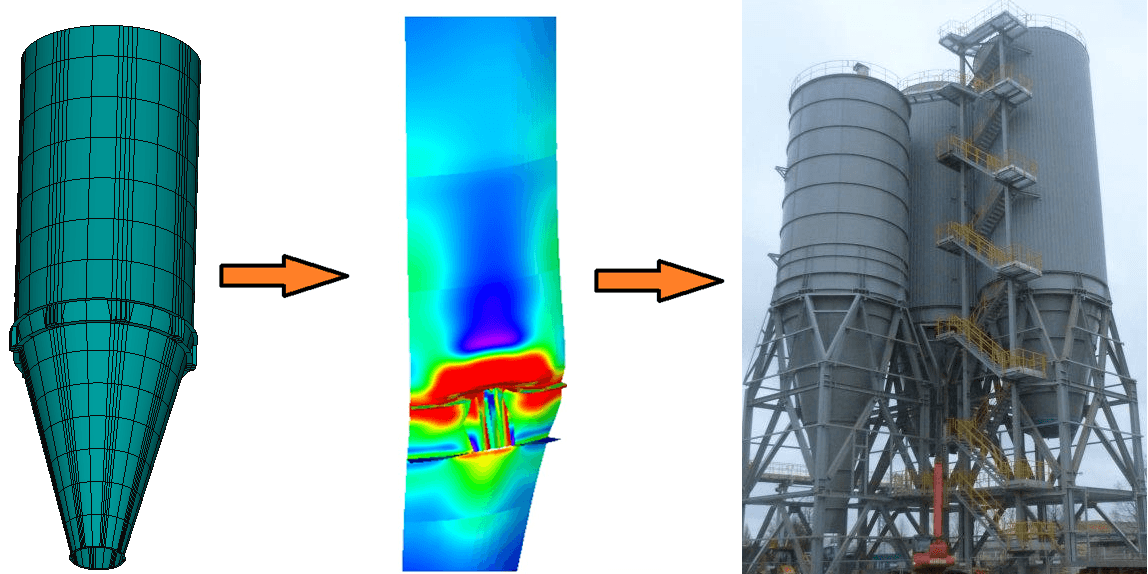 If you need to analyze something in FEA, a simple problem or a complex one, you can inquire writing to: lukasz.skotny@enterfea.com

Want to learn all the benefits of FEA (including heavily nonlinear solutions)? Start with my free nonlinear FEA course.

In need for more focused training? Contact me on courses@enterfea.com so we can arrange it (be it an online or stationary training).