Choosing FEA software and good options you want to have in it!

A few days ago Josh sent me an email with a question about choosing FEA software. And I realized I’ve never actually written about it. Time to fix it I guess : )

But since I’m experimenting with videos (let me know what you think!) I’ve made this one about it:

There are different “kinds” of software!

Before we start with selecting I need to address something many people are unaware of.

If you would like to solve beam models (and a bit of shell, but rather on a basic level) then I would recommend that you use a “beam” FEA software.

I’m completely aware that all FEA packages have beams (or at least far majority of them). But this is not what you are searching. You see in beams post-processing is rather time-consuming. You get all the code requirements (like EN 1993-1-1) that dictate when something is ok and when it is not.

Usually, those code-checks require calculations based on internal forces, model geometry etc. Those, however, are not “FEA calculations” but rather “code calculations”. You know rules like: “if this beam has such high bending moment and is so long and… then it will fail due to lateral torsional buckling”.

Thing is that most “common” FEA packages don’t have code checks integrated. I’m using Femap, and designing a simple frame here would be a nightmare! This is why a subset of software was created that simply have all the code checks automated. So you are using FEA to do static design in them and then implemented code checks to see if all is ok.

If you are using beam models mostly those programs are for you, and I will refer to them as “civil engineering” since most codes for beams are civil : )

If you want to solve shell and solid models, then you should use “general purpose” FEA!

This is the easier part. Those programs are called “general purpose” as you can do much more with them… but they are not so “focused” on beams so they don’t have codes implemented. A good trade-off I would say!

This is also a reason why I use 2 different FEA packages at my office all the time!

Of course, there are many more, but those are the ones I would consider popular. Funny thing is that what is popular strongly depend on the region you are in. So there is a good chance you have your own favorite “market leaders” in soft where you are : )

I’m using RFEM for 10+ years now, and I’m really satisfied in case you were wondering : )

The above list shows more or less the most common ones. It’s funny that first 3 are “Nastrans” that originated from NASA but were divided among 3 different companies (and then sold and re-sold several times). I would say that “Nastrans”, Abaqus and Ansys are the “main 3” of FEA world. I’m using NX Nastran with Femap.

Selecting FEA package is a tricky thing. This is because most of them are pretty expensive (some even insanely O.o).

I would advise you to go to Linkedin and find 300 people that work in your industry. Then politely ask them what software do they use for FEA in their company. I would ask people that work in the country/region you want to work in, as those things change across the globe.

When you will know their answers it should be easy to select the most popular solution – buy that!

Note, that this isn’t a recipe for buying the best software at the best price. But, you will use and own the “most popular soft” everyone is using. This will make it much easier for you to cooperate with others, and to get jobs for you (or to find a job).

Just be aware that the most expensive packages have an incredible amount of options. After all, you are paying for those! If you are not sure if you can use (or even need) many of them, maybe a cheaper soft will be ok as well. Just remember that you will learn in time, and sooner or later (hopefully) you will need those more advanced options as well!

Assuming that you want to buy a cheaper soft first (which in many cases is a reasonable approach!) at some point you will most likely upgrade it to a better one. This is absolutely doable and I’ve done it in the past.

Remember that the most important things “sit in your head”. The fact that you are good in FEA does not come from clicking speed in any given software. It’s the understanding how things work!

This means that when you will switch to another soft, you will already know what you are searching for. You will know that you need to use a nonlinear support, for instance. Then the problem is only to find an icon that generates it! You will be surprised how much faster this goes than learning what is a nonlinear support in the first place!

Of course, there is a price! When you use the software you learn shortcuts and you work faster in this soft. When you will change to another FEA package you kind of “loose” that (not to mention all of the scripts you wrote!). You won’t be as proficient in your work as you were… it will take some time to get there again.

This is, however, a small price to pay, for all the new possibilities when you need them!

Depending on the industry you work in, if you want a “beam FEA” soft I would make sure that it calculates steel, concrete, wood, and glass. Even if you don’t plan to design some of them at the start – maybe later a chance will appear?

On the “technical side” what I would like to have in a “beam” soft is:

Good things to have in “civil engineering” software:

From the above, if you will work in steel first 3 is a must-have for me. In concrete, I would definitely want plates and even nonlinear material (for cracked concrete deflections etc.). To be fair RFEM has it all, and I really like it, even as I don’t calculate concrete all that often. This is because you can use plates and nonlinear material in steel as well. For instance, you can solve details like that: 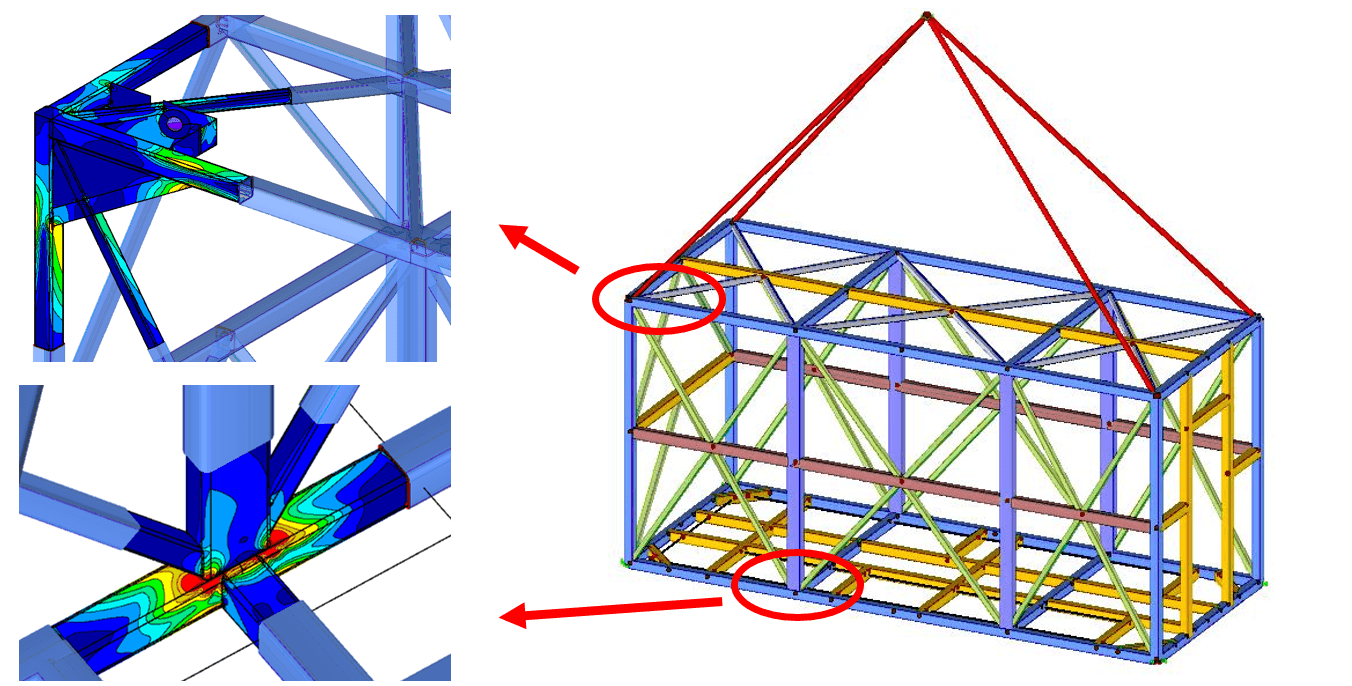 This is actually a good way to start your “more serious” FEA adventure – something worth considering!

When it comes to general-purpose FEA, giving advice is much more difficult. This is because I don’t know what you want to do, and I actually have experience in one field. So if you don’t want to do steel, maybe ask around for useful things – I’m sure there are nice people out there that will be willing to help you.

For me, as someone who works in structural steel and deals with stability the list would be:

Good things to have in “general purpose” FEA:

Most likely you don’t need implicit/explicit solver at the beginning. But it’s good to know that your soft can have it! This way you won’t have to change software later when you will need this solver!

Wow… that was a long write :p

Anyway, I hope this will help you in choosing FEA software. If you will learn (or already know) what software is popular in your industry/region please let me know. I will try to make a list so all people can see it!

In the meantime, thank you for reading this!

This is great – I have prepared a free online course for you! Just subscribe below to get it : )