Each day we do simplifications to boundary conditions just to reduce time spent on analysis. We are all aware, that structured support is crucial, but the actual influence of the proper boundary conditions is rarely examined. See yourself how drastic influence BC have on your design! I will discuss this using a project I just finished as a case study.

I have made a video for this post, but there is also a written version below 🙂

Get the free FEA course mentioned in the video below:

Recently I have finished a project for a Customer who became a friend a long time ago. Thanks to his kindness I can use the project as a case study. From all interesting topics, I decided to use it to discuss boundary conditions issues. I think those are one of the most popular problems in structural engineering.

The model I will use has deceptively simple support conditions. This makes it a perfect case to discuss potential mistakes!

What we are dealing with

The design was for 20 typical hoppers working in some plant in Germany. Each hopper stands on a concrete slab. This means that its support looks relatively easy: circumferential beam is supported in the vertical direction on the entire surface. This support zone is marked in black on the drawing below. In such arrangement making montage connections are tricky, so I have not used any. There will be a lot of load on the hoppers – friction will deal with any possible horizontal movement… and they won’t fly away either 🙂 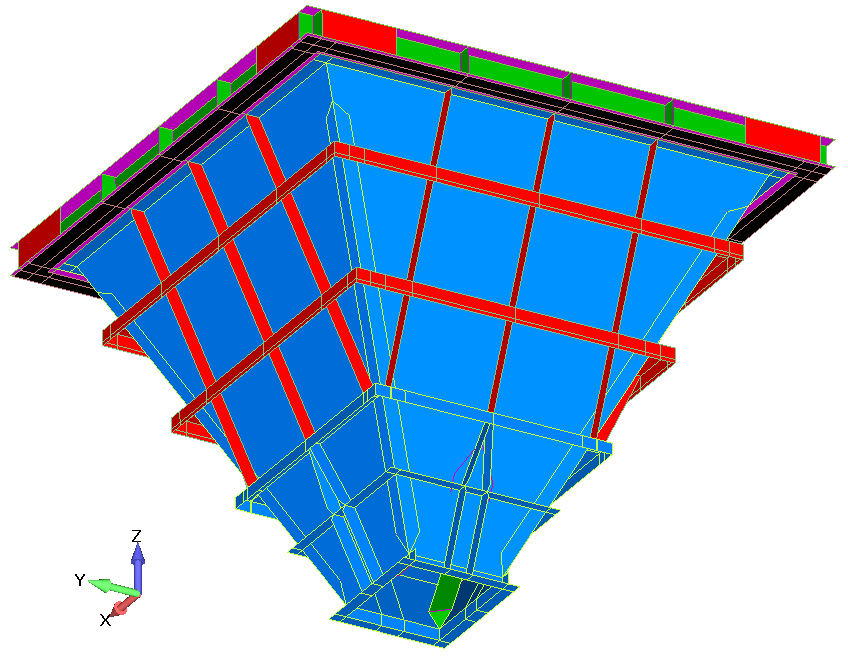 Usually, a correct answer is at the end but hey, I can start with good news from time to time right?!

It is quite obvious that support is a typical contact case. The bottom of the beam simply stands on the steel plate embedded in concrete. Support easily transfers compression forces, while there is no capacity due to tension.

Contact in the nonlinear analysis may mean convergence issues, some additional work etc. However, I always do design accurately and I have never regretted the invested time!

This is a von Mises stress distribution in the model. I have checked several places for plastic strain capacity etc., but this is not all that important here. Just notice how the stress is distributed in the structure, especially near the support zone. There will be few more models with not so lucky boundary conditions. You will be able to see how things will turn out 🙂

To make comparison easier I will also show a stability path for a node in the corner of the support beam:

Just support it on the entire surface!

I think that would be one of the easiest approaches. Instead of wasting time for contact definition and convergence analysis one could always simply set a support at the bottom flange working both in tension and compression. I must admit I have no issues with horizontal forces here – they are not high, and with enormous pressures, things will be just fine thanks to friction. However assuming that support can take tensile force is a huge mistake! Just look below how things changed!

Take a good luck at the support ring stress – it’s literally free of load! If I would assume such a conditions I would never knew that there was a need to strengthen the beam due to torsion. The model simply does not show it! If you wonder where all the load went (as it has to be somewhere right?) look at the 3 stiffeners in the support ring (marked in a circle). Before they were not loaded at all… now the entire load is hanging on them. To the point where analysis barely converged under full load. The plastic strain was so high in those elements that it was impossible to carry the analysis just after the load multiplier reached 1!

Entire load is going through the web – just support it there!

Another “interesting” idea. This is often used approach. When the beam is standing on something load is usually going through the web. So sometimes (just sometimes!) if you assume that support is somewhere in the web “region” you will get away with it. Here it wouldn’t work! Supporting the hopper under the web makes a huge eccentricity between the hopper and the support. This, in turn, makes for incredibly high torsion in the support beam. You can easily see below that the supporting beam got twisted just after the strengthening that previously was sufficient!

Stability path for the node in the corner is below. You can see that the response is far weaker – deformations are much higher with a relatively small load.

And what if I would think for a second instead of guessing?

There is one reasonable approach here. Let’s assume that I would have enough experience to correctly guess the flow of forces in the support zone. In such a case I would realize that supporting beams will be in torsion and that they will rotate. This, in turn, would lead to a conclusion that they will “stand” only on the “inside edges”. So I could make supports there.

The only thing that stopped me from doing that in design is one phenomenon. In rectangular plates loaded from the top corners tend to go up on supports. I was not sure if the hopper ring will be stiff enough to make such a response. When I’m uncertain I always play it safe, so I made the contact support to check. I could have just as easily make the edge support and check if the reaction force is negative in corners. This way, however, I would be risking doing contact anyway if that was true so I decided against such action.

You can see that the answer is not exactly the same. My instincts were ok – there is a negative reaction force in the corner that stabilizes the structure a bit. This is why the response on the stability path is more rigid than in the correct solution. At this point I could easily iterate and delete the linear support from the places where the reaction force was negative… that would be however a lot of work (as this is an iterative process)! Making the contact support from the start was simply faster 🙂

What is worth remembering:

Getting started with FEA

If you are interested in FEA try my free FEA essentials course.