Lately, I got several emails with questions about nonlinear analysis convergence. There are a lot of reasons why your analysis could not converge. One of them is a wrong loads/increment strategy which I call “steering”. Take a look at what are the possible options and what are the positive/negative aspects of each approach.

Steering have many names

Let’s start with the basics. I’m used to the term “steering” but I also saw people using “solution strategy” or “analysis approach” instead. When something has several names in use, it is usually a good idea to define the thing to avoid confusion!

As you know in nonlinear analysis solver divides the load into small “pieces” called increments. Solver then applies the load increment after increment (sometimes in a way you described, sometimes it automatically adjust increment size along the way).

Load “type” is relatively easy to explain. You can either apply active forces to the model or enforced deformations. This is a separate topic I will discuss next week, but in general, you will have one or the other.

This means, that each increment will either increase load (for models loaded with active forces), or displacement (for enforced deformations). Both approaches have positive and negative sides. In general, those can be summarized as follows:

Loading a model with displacements usually helps with convergence. Sometimes it can also solve problems with rigid body motion. Usually this approach is considered to be “better”

Loading with active forces allows to better describe a lot of load patterns. It is true that convergence will be a bigger problem here. However you can’t model certain problems with enforced deformations within reasonable time. If you don’t believe me try modeling a 1×1 square plate loaded with uniform pressure of 1 on entire area with equivalent enforced deformations! It is doable if you know the outcome… but it really is not worth it!

With incremental strategies I will divide them only into 2 groups so we avoid technical details:

“Normal” increments: This is an approach where solver will increase load or displacement (depending on what type of load you have in the model). You can do it in a number of ways. For instance you can specify the increment value (and it stays constant), or there could be an algorithm that chooses the best increment size each analysis step. Whatever is the case the thing is: Either displacements or loads are increased

Arc-lenght methods: Again there are plenty of those. Modified Riks method is the most popular one (with Crisfield method close behind). Usually they work in a similar way, to the point where some solvers simply call it “arc-length” without specifying which one is it. The trick here is that neither load nor displacement is increased (regardless of load type) but a “fictional” parameter. There will be more about it below.

So where is the convergence in that?

I’m pretty certain you have seen animations of FEA models that were loaded beyond capacity. Those tend to look nice for sure:

Such outcomes aren’t obtainable with all the possible approaches. To discuss this further, let’s solve a simple problem of shell buckling.

Such analysis leads to a stability path I show you below. If you don’t know what it is, subscribe below to get a free introductory course: 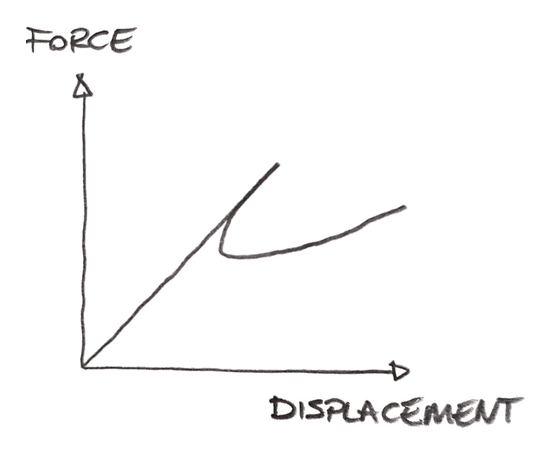 Now let’s analyze outcomes that are obtainable with each approach. To do that I actually calculated a shell using active load (case A), enforced displacement (case B) and arc length method (case C). All the stability paths I obtained are shown below:

It can be even worse!

The classical nightmare for the nonlinear analysis is the deformation of a shallow arch plate loaded with a concentrated force. You can see how the deformations look like along the stability path:

I simply love this case – it never stops to amaze me how complicated simple thins are! The stability plot for this example is given below: 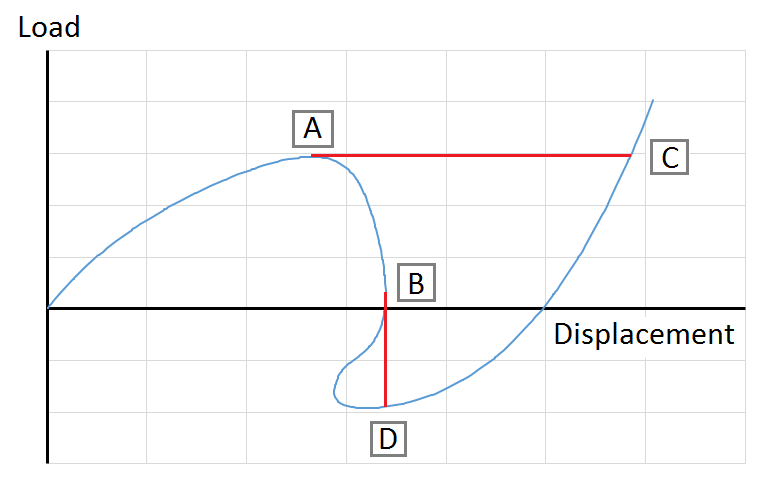 This is what would happen in our 3 scenarios:

What to do if you have convergence issues

Based on what I have shown you today I would draw such conclusions:

I hope you will find this useful. Let me know what you think about it in the comments. Also if you want to help out – share this article with your friends 🙂