I got a question from Manoj about the basics of rigidity. Since the post about structural rigidity (gummy bears!) is so popular I figured it would be nice to share another story about rigidity I often use… cavemen!

The question may seem simple, but I’m sure there will be plenty cool ideas in this post you may have never heard before! After all, who doesn’t like a good story, that explains stuff in a simple way?

I literally hated classes on strength of materials. They were boring, stuff seemed unpractical, and there were differential equations and integration… and not much more!

For years I despised those courses. Until I really needed to use some of the knowledge from that area. Of course, I didn’t learn the strength of materials as a student (straight A’s BTW). Since I was thinking this is a “theoretical poop” I simply did the bare minimum to get an “A” without any effort to understand this stuff. Bah! I even learned some differential equations by heart, as I was too lazy to learn how to solve them!

So, when the need to use the knowledge came… it was time to really learn this stuff. Luckily I always had a good intuition to understand things in this funky-childish way. With this skill I was able to tell stories to myself about things, that helped me understand this all. Later, I found to my surprise, that people usually don’t learn this way. So I started using those stories in the Uni courses I ran.

I strongly believe that until you cannot explain how something works in engineering to your grandma, you simply don’t understand that enough yourself! This is what the stories are for!

Once upon a time in France…

Our cavemen tribe lives in France. This is an important fact since it is a common knowledge that in France trees aren’t round! A typical cross-section of a French tree is rectangular as you know. This is important and will come in handy! 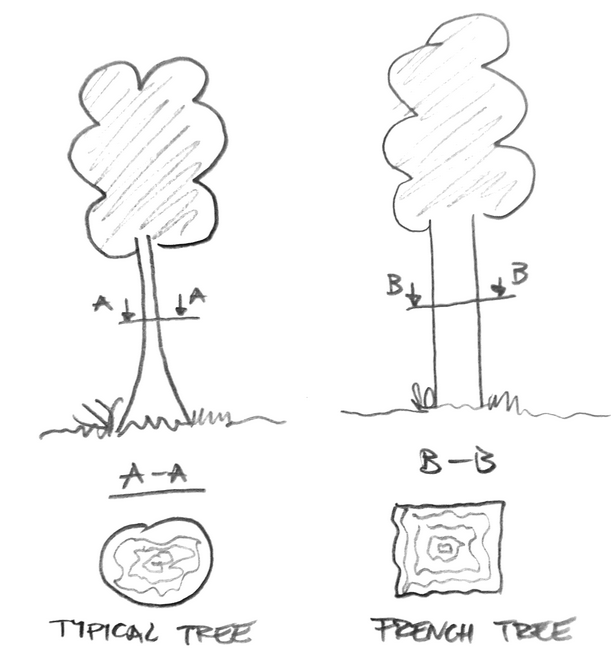 Since there is plenty of trees around all they need to do is to cut one, push it over the river and cross on it.

Of course cutting a thinner tree means less work… and this is how we found out a first optimization issue!

With nothing more to do, our small tribe decided to make some tests, just to see what will happen.

The first observation is primitively simple. The thicker the tree the stronger it is. Surprisingly the outcomes aren’t all that consistent, but after few years cavemen can more or less “guess” if the cross-section is sufficient or not. First engineering tables are created: 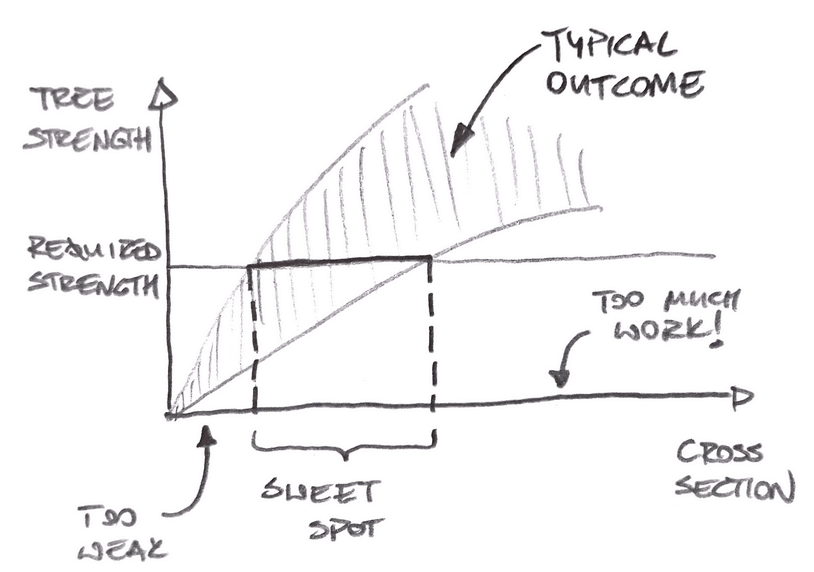 This is the simple cross-section area! The more you have it the better!

Accidents in service of development

Theoretically, the story could end here, if not for the fact that someone made something stupid. Instead of putting the rectangular cross-section “flat as always” someone put the tree in the upright position… and the capacity was off the charts!

The same cross-section, but placed in a different direction gave dramatically different results.

The first thing that is easy to notice is that the “flat as always” trunk deflects far more than the “upright” trunk under the same cavemen load (let’s call him Ugh!).

There is one very important conclusion to make here: deflection does not depend on the cross-section! There is “something else”!

In order to look deeper into this fantastic discovery, we need to make few assumptions. We are a bit hopeless when it comes to defining tree “position”. Using “flat as always” and “upright” make a lot of sense for a French tree… but for an irregular shape, such description won’t work!

Also we cannot use “top”, “bottom”, “right” and “left” to describe this position. It is simple to prove:

Note: Load direction (and direction of deformation) is perpendicular to the axis! This means that if the load acts downward the deformation will be against the horizontal axis. Just as I have drawn above.

This may be a bit confusing at the beginning, but after a while it becomes natural 🙂

Thanks to this discovery, instead of going with “top” or “upright”, the direction of load (or direction of deflection if you like) will be defined against an axis. This is perfect, as the cross-section always have the “strongest” and the “weakest” direction. This doesn’t change if you rotate this cross section! Also to avoid confusion we will always place axis in a way that they cross in the center of gravity of our cross-section. 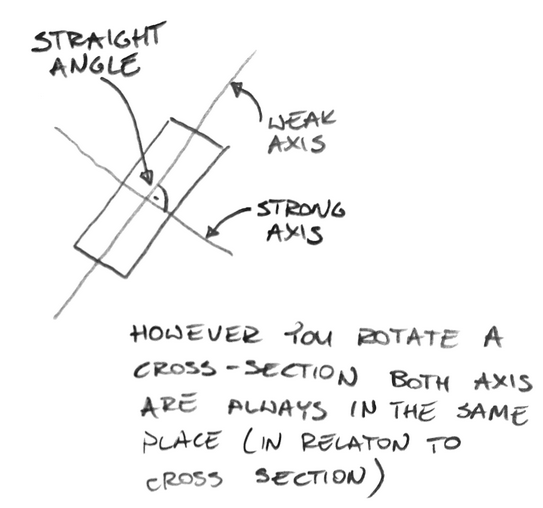 You could also notice, that the trunk in the upright position wobbles a bit when loaded. Maybe not wobble in a real sense, but at least seems unstable somehow. This is a stability issue: every cross-section wants to be bent against it’s weakest axis. If you bend it against the strong axis it will try to rotate to change where the load is applied. This is called lateral torsional buckling, and it is a topic for a completely different story!

Where is the strength hidden in a tree?

With the axis defined, there is only one piece of the puzzle we are missing. That is: what is the difference between the strong and the weak axis?

Let’s take a look once more: 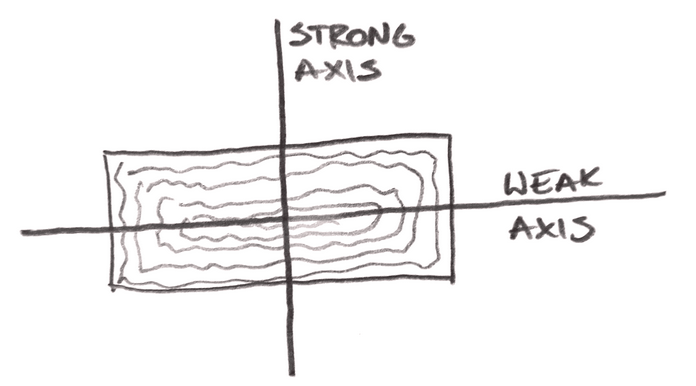 If we would look long enough it would definitely hit us! Wood is closer to the weak axis, and more “far away” from the strong axis. Basically, this is the only and the most important difference.

This phenomenon is described by a parameter called moment of inertia.

If you would think about it, this makes perfect sense. After all, this is why we make I-sections right? 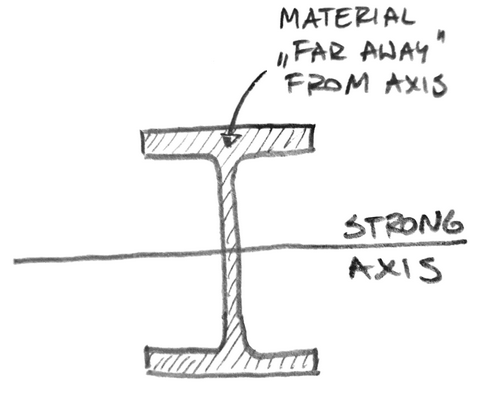 The story goes on…

To be honest, there is more to this story, but we reached the point where I can simply answer Manoj question. I’m pretty certain that sooner or later I will get back to this!

To answer the original question

I hope you have found this useful!

First of all, if you have a question related to FEA or structural steel feel free to send it to me at: enterfea@enterfea.com. You can also leave it in the comments below, or send it via Linkedin. This way I will be able to answer your question, just as I did with the one I got from Manoj!

Learning about rigidity is a great step toward using FEA. This is because rigidity is one of the fundamental concepts you need to understand to master Finite Element Method. If you like FEA, you can learn some useful things in my free FEA essentials course.