Introduction to material and geometric nonlinearity

In engineering practice, you will often find problems that cannot be solved in a simple linear calculation. Sometimes stresses will be high, and plasticity (or other nonlinear material property) must be taken into account, sometimes elements will be slender and sensitive to changes in geometry in which case geometric nonlinearity must be used.  In this post, I will shortly describe what it means that analysis is nonlinear, and show an example of basic nonlinear problems.

Linear Analysis (LA) along with Linear Bifurcation Analysis (LBA) have their uses, and many problems can be solved with only such tools. However, when higher stresses are possible (possibly causing material yielding) or elements are slender (causing risks of stability loss) nonlinear design is required.

There are basically 2 types of non-linearities: material nonlinearity and geometric nonlinearity, but sometimes contacts are also referred to as being “nonlinear”. I will try to briefly describe both nonlinearity types here with short examples.

Usually, the material used to create the model have nonlinear stress-strain relation. I think the most known nonlinear material is steel and most examples in my blog will feature steel structures and objects. If you are unsure how the stress-strain curve for steel looks like you can quickly check that in Wikipedia.

The difference between linear and nonlinear material in analysis can easily be shown. Incorporating nonlinear properties of materials not only allows for accurate calculation of stress distribution but also makes it possible to verify certain load-bearing capacity aspects of the model like plastic collapse (this will be discussed in the future).

Below is an example of the same model with linear (on the left) and nonlinear (on the right) material. The plot shows von Misses stress in [Pa].

I think this nonlinearity is a bit more “subtle”. It is quite hard to show the difference in pictures but there is a good example:

Imagine you have a string attached to walls on both ends. If you would like to hang something on this string linear approach would treat this string as a simply supported beam (both ends “pinned” at the walls) with a linear load from hanging objects. If one would calculate the string bending resistance and the theoretical bending moment from the load the capacity of the string would be hugely exceeded, deformations would be very high but no axial forces in the string would be generated (and no horizontal reaction forces in supports). Such a situation is shown below on the left. On the right you see the same string with the same load, the only thing that changed is that the model was calculated with nonlinear geometry. This process takes into account that the deformations of the model can have a big influence on force distribution and further deformations.

In our example, the linear approach treated the string as a simply supported beam. In reality, strings do not act like this, but to catch that geometric nonlinearity is needed. The mechanism behind the difference is actually quite simple. Since the string deflects, there is a certain height difference between the string axis in any given place and the level where supports are. This difference will act as an arm of forces (between pulling horizontal reaction and tensile force in the string) and as such this will allow carrying bending moment (by means of the tension in the string). Of course, this only works if both ends of the string are pinned and can carry horizontal reaction forces (which do not appear in a linear model). This is quite intuitive: if one would attached string to a wall at one end, and the second end would simply lay on the table nothing can be hanged on such string as the “free” end would simply fall from the table since there is nothing that can carry longitudinal force.

Of course, material and geometry nonlinearities can and often are used together in one model. There will be many examples of it in future posts. Today however I wish to end this post with types of analysis definitions as I will use those shortcuts in the future. The shortcuts and names I have listed are very common right now and are even featured in European Civil Engineering Standard for shells (Eurocode EN-1993-1-6).

Glossary gives a short description of each of the above analyses and points out where in the blog they were described here.

This is the most basic information about nonlinear FEA, but I wish to start from the beginning. Next, I will discuss the biggest issue with FEA in general: problems with results interpretation.

Have a nice day

Try a free online course I’ve created! You can get it by signing up below this post

I have one question or observation.
Can you comment in more detail on the first figure from the text? Because scales for stress levels are different and it is a bit hard to compare the two.

You mean the stress levels? That is the point - with nonlinear material you can actually have yielding in the analysis, meaning that the stress level won't be higher than yield stress - in this situation 235MPa

Dear Lukasz
Thank you for this good post!
I wonder why does the weight on the string not make a triangle like in the real world? Why is the string still "stiff"?
Michael

There is a continuous load along entire length of the string. This is why deformations looks like this :)

If you have any more questions feel free to ask - I will help as much as I can :) 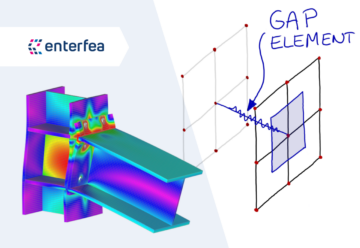 GAP element rigidity will depend on the material of the parts in contact... and also on the mesh size! Learn how to calculate it! 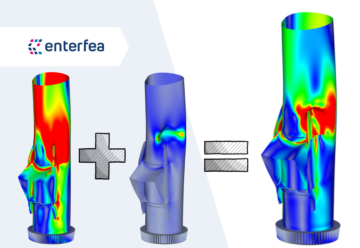 Interaction of Nonlinearities in FEA 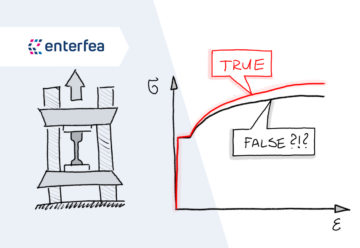 When I started my FEA adventure at University I was completely unaware, that true stress and true strain existed. I…