If you are starting with nonlinear FEA you most likely heard the term load multiplier. Usually, people associate this with some sort of “safety factor” but frankly this has nothing to do with safety. In fact, this is the only way you can get an outcome out of nonlinear analysis and today I will explain to you why!

Start with something simple

Imagine this classical cantilever loaded with horizontal and vertical force – a solution shown in most textbooks and for a good reason. It teaches us about superposition of loads, but today we will look at it from more “general” point of view.

What you can see is that horizontal force “produces” bending moment (M), and some shear force that I will ignore here. The vertical force produces compression in cantilever (N). This is a very simple task so I will keep it short. As long as deformation “e” remains insignificant all is well. You can actually calculate the stresses in a simple way and sum them up later:

Above I showed you how to solve an example with pure bending. I usually ignore shear in such examples as in real beams it rarely plays a significant role. Sure you can have a welded beam with slender web and worry about stability etc. but this is a general case. Stress from normal force N is easy to calculate as well:

As you know both stresses are normal stress and can be added. Such action would give us a general “capacity” of the beam cross-section. Such approach does not include stability but there are ways to deal with that as well. (If you are interested in such design to let me know in the comments, I can write about Eurocodes as well).

Think about the case however where the deformation “e” I have mentioned before is big and cannot be ignored. 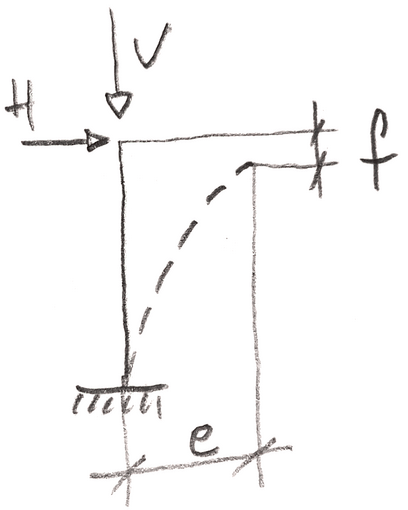 Then vertical force V acts on a certain eccentricity causing additional moment, which makes the vertical deformation f. This additional deformation f creates a situation where horizontal load H causes an additional bending moment. Both effects are nonlinear and will increase incrementally until the deformation stabilizes or structure fails.

This can be solved in two ways:

The above approaches are significantly different. Usually, you will use nonlinear calculations for problems that are not described in codes (or are described very conservatively and nonlinear FEA allows for better design). In such a case the first approach won’t be possible.

In a lot of situations, however, we are used to this “get rules from the code” approach, and we lose an important factor. Following this path, you will notice, that it doesn’t matter what values of H and V you will take… you will still get the internal forces in the end. Those on another hand will make it possible for you to calculate capacity. In such case, it may seem that capacity is “independent” of the load.

This is however not true, as codes actually take the forces into account in the capacity design. You can see a good example in EN 1993-1-1 with equation 6.61 and 6.62. In this approach, you can “combine” compression and bending in one “place”. Note however that factors changing the values of the moment (kyy, kyz etc.), actually depend on the normal force! It is easy to miss this since software usually does the calculations for us!

Why it is important that capacity depends on the load

We are getting to the bottom of it. Let’s start with how things aren’t:

We are used to thinking that something has a capacity due to bending, and a “different” capacity due to normal force or shear. Those effects, however, interact, witch, each other, and produce a “unique” mix which gives us capacity of the element… under certain load.

This means that you cannot be certain if the reduction of any “part” of the load will reduce the capacity ratio. The same goes for increasing the load – it doesn’t have to increase capacity ratio.

This is a very important step in understanding why we have to use load multiplier. But to make it easier to imagine take a look at one more example:

In a typical silo the walls of the shell work against 2 types of loads. Due to friction part of the material “hangs on walls” causing vertical compression (I called it “F” in the drawing). Also, the same material causes horizontal pressure that causes circumferential pressure (denoted as “P”).

Notice that vertical compression from load F wants to cause instability in the shell. That instability would cause a dent inwards over one of the columns. Such dent usually means structural failure as it is the normal buckling phenomenon in shells. I won’t go into details here, but the shell will buckle inward simply because to buckle outside it would have to increase the circumference. This would require a lot of energy, and buckle inward is “cheaper”.

In other words, increasing horizontal pressure increases capacity… up to a certain point. Point in which circumferential tension is so high that steel yields locally over the column and we get an “elephant foot buckling”. So we cannot say that horizontal pressure is “good” – it can be, but it also can be “bad”.

What load multiplier is

You made it. Now you know everything that is needed. Let’s sum it up to better define load multiplier:

With this all in mind you see that it makes little sense to calculate capacity for a “selected” part of the load. We are used to thinking in terms of “beams capacity to bending” or “column capacity to compression”. The reality is richer, however. How would you like to calculate the capacity of a silo shell for vertical buckling? You can’t! This capacity also depends on the horizontal load.

This means that whenever you are making a nonlinear analysis the outcomes will be like this:

Structure failed with the load multiplier equal to “X”

Which means: take the load you applied and multiply it with “X”. This is how much load your structure can withstand.

If you would ask “will it be ok if I remove part of the load” the answer is… it depends! That would be a different analysis. After all, you could be reducing the horizontal pressure in a shell… that is stabilizing the entire model! This is why the outcome is a load multiplier… if you want to change values of a part of the load you will have to make an additional analysis!

In other words, load multiplier gives you the answer to what is a capacity of a structure for this given set of loads. It does not say what will happen if you somehow change part of the load.

I hope you enjoyed this. Without a doubt, there is a lot more than you can learn about load multipliers and it uses… but this post is getting long. I will get back to it sometime. If you enjoyed the article please leave a comment and share this with your colleagues. This will be a great help!

This is great! I have a free nonlinear FEA course just for you! Subscribe below to get it!