Fun story of the Hooke’s law

I must confess I always felt like a rebel when it comes to how I think about engineering and teaching. I’m not a complex math junky, but I don’t think it stopped me to understand complex problems. If anything I believe I understand them even better… and lack of “math” simply made stuff more fun and “experimental”!

Since you are reading this I hope you feel this at least a bit as well.

Some time ago Zeus recommended me a book by J.E. Gordon “Structures or why things don’t fall down”. The title itself pulled the string in my soul… and I just got a copy by mail!

I must say that I instantly loved the style and how it is written, and I decided to share some awesome stories from it as I read along : ) As you know stories are so much more fun then equations. Also knowing how people figured things out in the first place will definitely help you to understand those things! After all… scientists added mathematics at a much later stage!

Today, a brief and unexpected story of Hooke’s law!

The story starts with the fundamental question that is:

Why stuff resist loads at all?

What happens, that when you press a stone it’s… well “solid”. Why does it resist the load?

This is not a trivial question, and it’s worth mentioning we are somewhere in XVII century. This means that it’s not the only thing we don’t know : ) In fact, it’s so difficult, that Galileo himself didn’t really come up with a good answer to this issue!

First real progress was made by Robert Hooke (1635-1703) who lived almost at the same time as Isaac Newton (1642-1727). They even knew each other, at least to the degree sufficient for Newton to despise Hooke… but more on that later : )

The thing is… why on earth does the ground push on you?! Ok, in case of the ground you could propose various philosophical or even religious arguments. But of course, this is not limited to standing on something by far! There are a lot of examples of this “equilibrium” and the best one comes directly from Gordon’s book (and in style!):

(…) it is generally fairly easy to see why a load pushes or pulls on a structure. The difficulty is to see why the structure should push or pull back at the load. As it happens, quite young children have had some inkling of the problem from time to time. 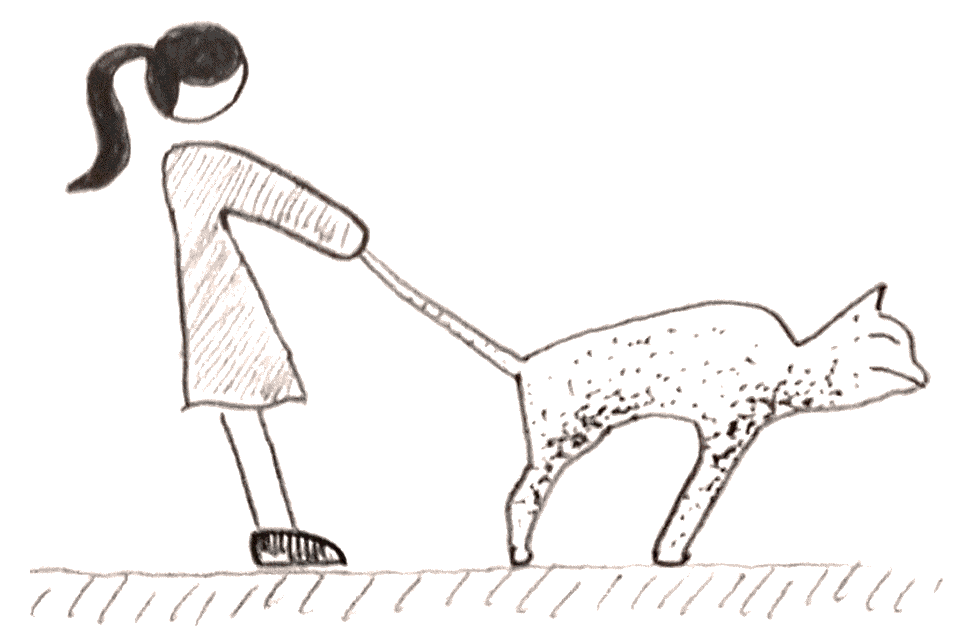 If we are talking about living creatures we can imagine that cat uses its muscles trying to yank its tail free. This is why it “generates” force that is opposite to girls pull on its tail. Since both forces are equal there is equilibrium and neither girl nor cat moves (the cat is not happy about that!). 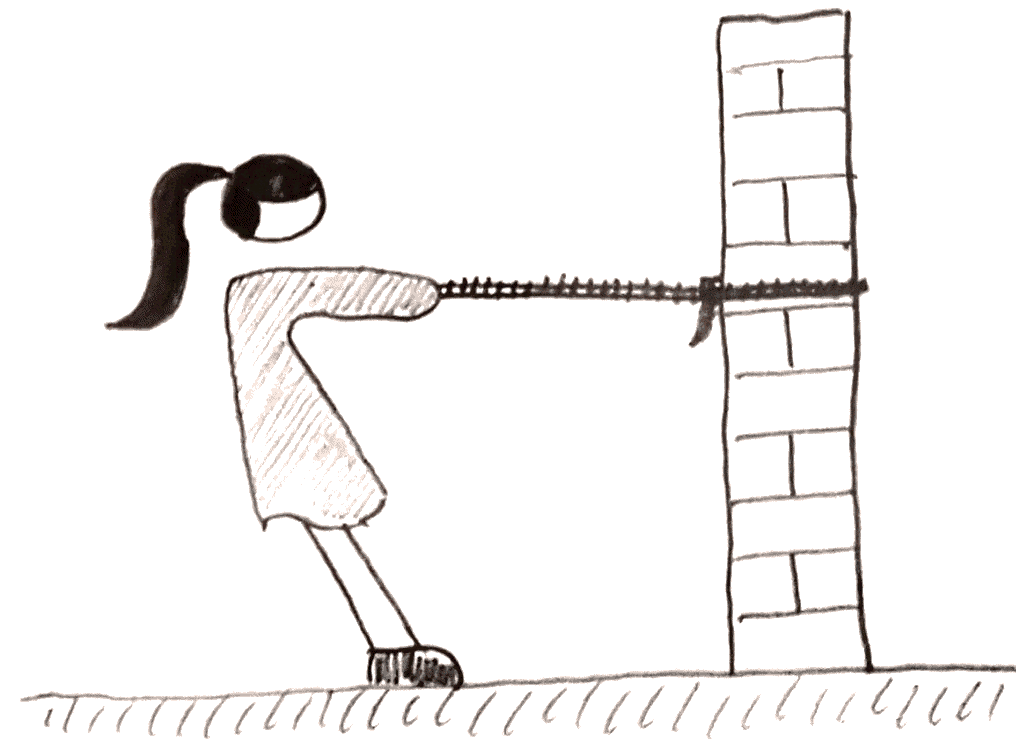 In its simplicity, this is the core of the problem. Solving it must have taken some serious thinking! Finally, however, Hooke concluded:

The power of any Spring is in the same proportion with the Extension thereof!

From there it was quite easy to sum it into a shorter sentence:

As the extension, so the force

And this is what we now call the Hooke’s law. He published it in 1679.

This was a really neat discovery. The more you pull the more material deforms. Since material does not like to be “deformed” if pulls back at the string to go back to a previous state. Simply put, Hooke discovered elasticity!

Funny thing is that mathematics was not involved. This happened later : ) Now wiki for Hooke’s law shows:

I don’t know what you think, but I prefer the cat!

Deeper into the stuff

Hooke was mostly examining entire structures (or things if you like). He would load beams and measure how much they deform etc. This allowed him to form general conclusions. He also realized that after the load was taken beams got back to their original shape within an accuracy of his measurements (which he wasn’t very good at!).

But Hooke did one more major thing (apart from inventing cool stuff like a universal joint that we use to this day). He observed that the “deformation” and “going back to original shape” is not the property of the structure itself. The conclusion was that it is a property of the material that builds the deforming object.

He reasoned, that everything is made of small particles that are connected by the “springs”. If you press the material the springs get shorter (and push back). This causes the “reaction force” in the material, and is also responsible for deformation. I like to use a table with a load as an example of this: 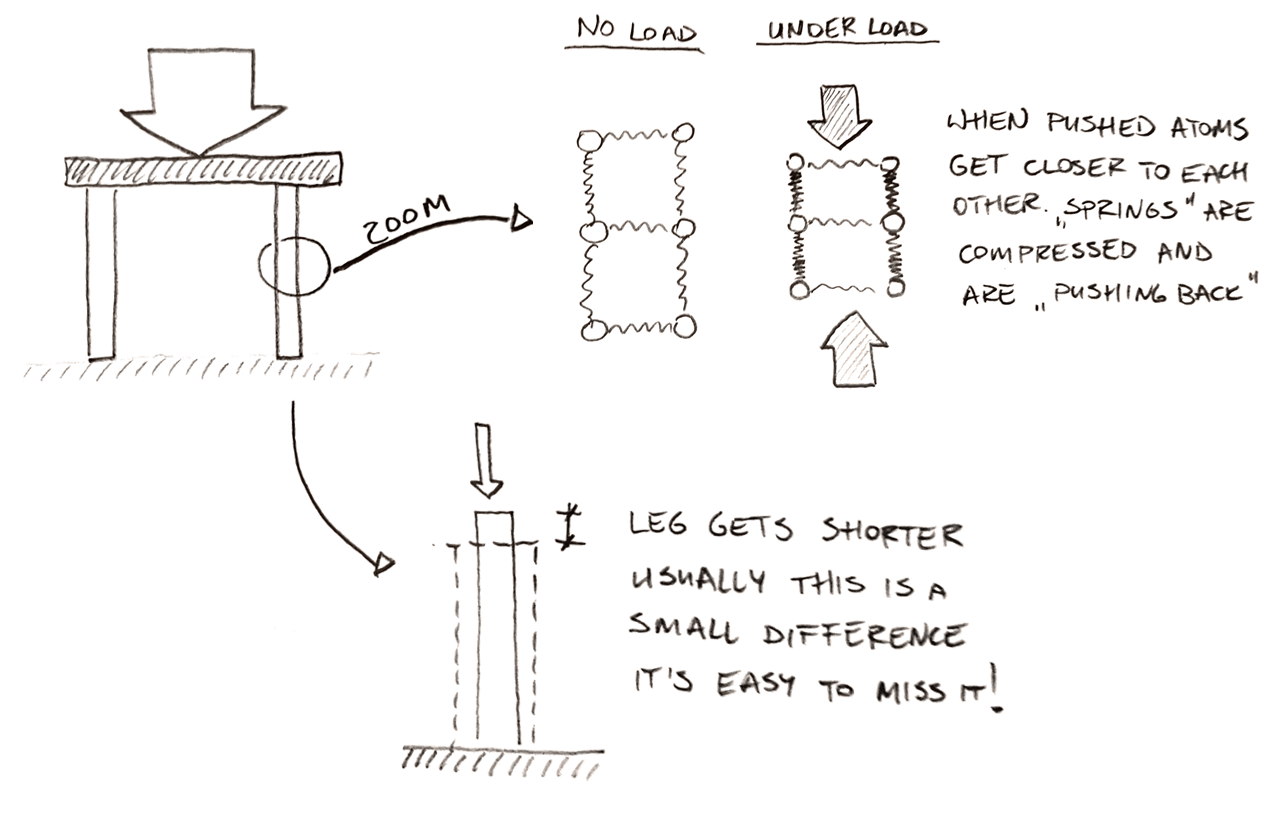 This is what happens inside the wall the girl is pulling with a string. It deforms ever so slightly, tensioning and compressing some of the “atom springs”. Since it wants to get back to original state it pushes back at the string hence creating equilibrium. A bit like a cat I would say!

Play nice! This will be good for your career!

What I love about this story the most is that Hooke did the engineering I love the most. He was very down to earth, and he used science to further down technology and standard of living for people. Hooke designed a lamp used in many households and carriages even 200 years after his death (the lamp used a spring feed to keep candlelight in the center of optical system systems even if the candle burnt and got shorter!). He helped to build a vacuum pump and figured out a compound microscope.

Sadly, Hooke was also known for his bad temper and huge ego. He was also a ladies’ man and lived for long in an informal relationship with his attractive niece Grece.

Newton (who personally was a snob) couldn’t stand that. He was more into “high-plane” science (apart from the law of motion he did some heavy research on the meaning of the number of the beast for instance)! But Newton also had an entirely different lifestyle and philosophy. Those two developed a bitter enmity, that lasted even after Hooke’s death.

Newton (who lived 20 years longer), did a lot to discredit Hooke, his memory and… the importance of applied science(!). At that time Newton was already a super-famous guy, so this came relatively easy. It is also why applied science didn’t get a lot of attention for the next 100 years (!). Next in the line for discovering something interesting about elasticity was Young and Cauchy… but that it for another story : )

There are few important things one can remember from this history:

I hope you enjoyed the story, I know I did! Let me know if you like such posts and if it would be a good idea to write more of those! Also, if you like it share the story with your friends!

Do you want to learn more about FEA?

This is great! I’ve prepared a free FEA essential course! Subscribe below to get it: